Heading south toward the Everglades, we were rounding a corner in Fort Lauderdale when something rolled out of traffic and came to a stop in the striped dead zone between lanes. As it slowed I realized it was a person, and I remembered seeing a scooter a few cars ahead of us.

I dropped my kickstand in the road and ran up the median. The line of cars slowed, then drove around the downed scooter and went on their way as the rider picked himself up and walked in agitated circles.

"Are you okay?" I asked. One of his shoes was sitting nearby, and the moped was lying in the road at the tail end of 20 feet of skid marks.

"Damn bitched slammed on the brakes!" he replied.

"That sucks," I said. "The drivers around here are awful." 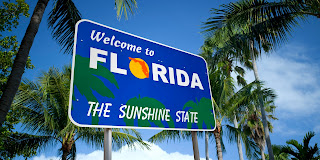 He shook his head and bounced in circles. He was wearing a helmet at least, but clothed in a t-shirt as most scooter riders are, and a large amount of skin was missing from his right arm. I asked if he had hit his head and if there was any way I could help, but he waved me away. I rescued Bee from traffic and drove away, wishing there was something more I could have done.

The drivers in Florida really do scare the crap out of me. I've nearly been wiped off the highway three times since we've been here by people who have shifted into my lane without looking. Someone told me it's the unfortunate mingling of retirees, rich youngsters, and South American immigrants. Whatever it is, it's awful.

The third time someone tried to replace me with a car, which was in the dark on I75, that little streak of Masshole that I usually keep buckled down came out to say hello. Almost before I knew what I was doing, I had turned on my (very obnoxious) aux high beams and parked myself at the bumper of a small car. The driver remained somehow oblivious while I blinded them, and eventually good sense got the best of me again and I zoomed away, silently wishing ill upon them.

Usually I keep my head on and don't give in to road rage when I'm riding. It's not worth the risk; the only fight I'll ever win is a speed race. I think it's the commonplace nature of that kind of incident here that led me to have a temper tantrum. I've learned to ignore occasional idiocy from other drivers, as we all have our moments and I appreciate a little forgiveness when I don't notice the light has changed. But when it becomes the norm, I feel like something must be done in the name of change, and all I can think to do is be an asshole.

It's about time to get the hell out of Florida. But first, we'll hit the Everglades and the Keys.
Posted by Skipper at 12:15