After Philadelphia, we made another quick visit to Rocky Raccoon in New Jersey. From there, the plan was to split up for a couple of days so Rogue could visit a friend in Pittsburgh while I headed south again. Her friend had invited me, but there are more cats in his house than my allergies could handle, so I opted for the woods.

I was removing the GPS mount to move it over to Zee when one of the shims fell into the bike and disappeared. It's a stupid little piece of plastic, but it makes the mount fit our 7/8" handlebars, so it's essential. I ended up disassembling Bee's right side in the hunt. Rogue eventually found it nestled among some cables, but not before I spotted something that made my heart sink: a leaking fork seal. 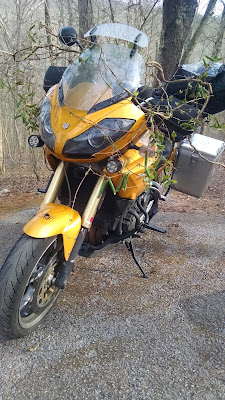 Those seals, as you may remember, took us most of a day to replace at the beginning of January, the day before we left. They're supposed to last for years. They worked for just about five weeks.

"What's the plan now?" Rogue asked as we put Bee back together and mounted the GPS to Zee.

"Same as it was," I said with a sigh, trying to convince myself not to say, Go the fuck home and call it all off.

One of two things happened with the fork seal: either there's a scratch in the fork leg, which would have to be new because they were pristine when we reassembled them, or I dropped a metal shaving into the fork. While screwing them back together, I caught the wrench on the top of the cylinder and sharpened it unintentionally (the cylinder, not the wrench). I thought I got the metal bits out, but it's entirely possible I missed one. 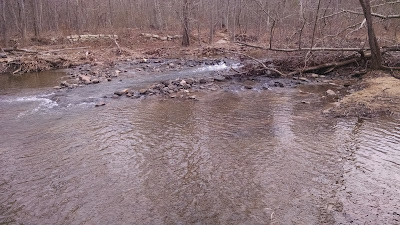 So Rogue headed off to Pittsburgh and I turned southward into Virginia. There's a campground in Strasburg called Elizabeth Furnace that I stayed in back in August, and I pointed us there. The bathhouse was closed for the season but dry camping was still allowed. The weather was beautiful - 70 and dry during the day - and there was more dead wood in the forest than I could possibly burn. 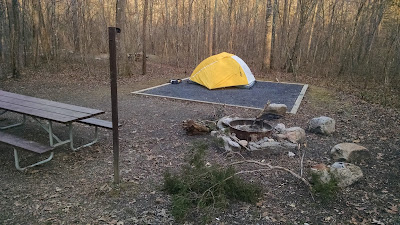 The sun was headed into the mountaintop on my second night there when a couple of bikers rolled in and parked in a site on the other side of the grassy center. I wandered over and introduced myself, and ended up spending the rest of the night swapping road stories with Gary and Mike. They reminded me of myself and Rogue; they had clearly spent that much time together and more, and had a large stock of ridiculous stories to tell on each other. It was unfortunate that Rogue wasn't there to meet them, but I'm sure we'll find them again somewhere along the dusty trail. I do love the Virginia wilderness, and they're local to it.
Posted by Skipper at 11:39