We were headed south, possibly toward the Everglades, when Rogue pulled up and waved at me. She pointed at her saddlebags, and I glanced at my own in the mirror and was surprised to find my rain suit gone. We took an exit, returned north, and entered the turnpike again for another southbound pass. Since Rogue had seen it fly away and I hadn't, she led the way.

It was less than half a mile from the entrance ramp, but traffic was heavy and pulling over proved difficult. We parked in the delta of the next exit, and Rogue waited while I sprinted across the four lanes of traffic and walked north. 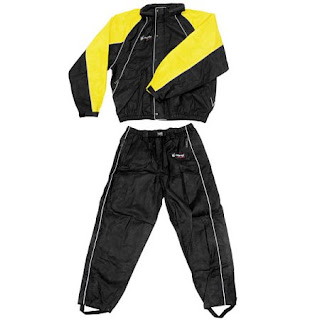 A few minutes a long, a police cruiser sailed by and wailed its siren at me. I expected the officer to pull over and give me a hard time for walking on the highway, but I never saw them again. I wanted to ask what the point was of making noise at me. I know I'm not supposed to go for a walk on the turnpike, but I'm not supposed to litter either, and the rain suit was expensive.

Unfortunately by the time I reached it, the pants and the bath towel that had been with them were long gone. The jacket I retrieved and walked back to the bikes, which were thankfully un-crashed-into.

After all that, it turned out that the jacket zipper had been broken anyway, so it was marginally useful at best. I ordered a new rain and had it sent to Tyson, hoping we wouldn't encounter heavy rain in the next ten days.

I loved that rain suit and had plans to write a glowing review of it. I'll probably still do that, using photos of Rogue's, because she has the same one. The replacement is a different model from the same company, though, because I was forced to go with the cheap option. On the bright side, I'll have two different suits to review when it arrives.
Posted by Skipper at 11:49