The weather was warm and clear as we headed into the mountains. Eventually we found some clouds, just enough to keep the sun from blinding us. We were both excited about the Dragon. The last time I rode it was in August, and I'd been putting some work into my riding skills in the intervening time. Rogue had yet to test herself on the famously twisty mountain pass.

We made a brief stop at Fontana Dam, since we were passing by it anyway, and snagged some pictures from the bridge. 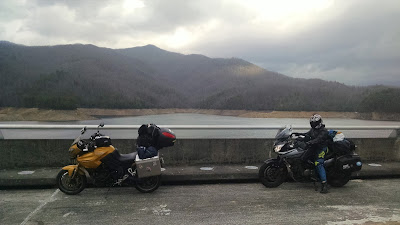 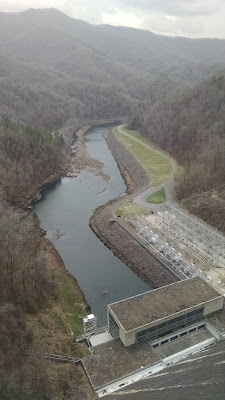 When we arrived at Deal's Gap, we were startled and disappointed to find it closed and locked. The parking lot was blocked off, with a sign saying it was closed for the season. 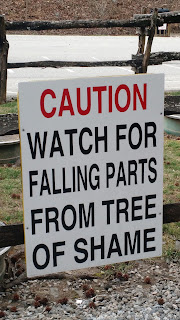 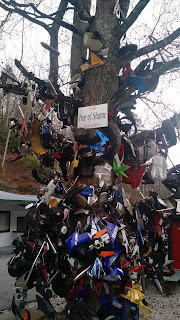 The season? What season? It was 75 degrees, dry and summery. Why would you close a motorcycle resort when such beautiful weather can still be had?

Fortunately the road itself was open. We set our iPods to our favorite respective riding playlists (Lindsey Stirling for me) and twisted our throttles.

I remembered the Dragon being a terrifying experience. When I took Bee through it the first time, I stayed in first gear through most of it, used my brakes a lot, and was fairly unhappy with my performance afterward. I was also very glad to get back to smoother, more open mountain roads, like 28.

This time it was like a different road. The study and practice I'd put into my riding skills paid off in spades. It was no longer scary and intimidating, but an exciting challenge and a wonderful space to play. 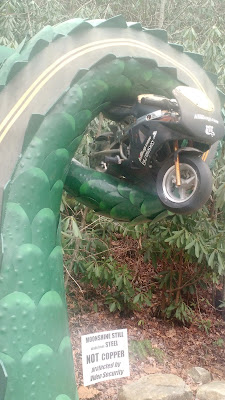 The upside of it being off-season was the small number of other vehicles on the road. Two tiny souped-up sports cars whined in ahead of us and were gone. A pack of sport bikes came screaming through from the north, their riders dragging knees along the yellow line. I passed two pickup trucks and a sedan, and waved to a pair of people on a large touring bike. A handful of people were photographing the scenery at the overlook, and other than that, we had the road to ourselves.

A few minutes in I scraped my left boot on the pavement and tucked my feet closer in to the bike. Then I scraped my right boot, and then my right peg. I was disappointed to find the 11 miles and 318 curves over so soon, and I idled in the pull-off at the far end in a cloud of tiny flies and waited for Rogue. When she appeared, we dove back in again. 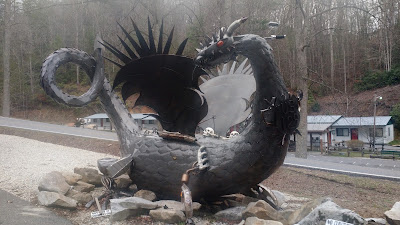 If my run north was good, my run south was great. Sailing into a right switchback, I dipped Bee so low that she squeezed my foot against the asphalt and I yanked us out of the turn, startled. For a moment I was puzzled - I knew I hadn't reached the limits of the bike - and then I remembered Lee Parks' advice on lean angle and was able to troubleshoot myself. Through the remaining miles I hung off the side of the bike through every turn, pushing my skills into a new level.

I popped out of the south end and back into Deal's Gap with a huge grin on my face, knowing I had just leveled up. Between swatting flies and rolling out my shoulders, I inspected my back tire and was proud to see that I had finally reached its edge at least once. Those chicken strips will disappear yet.
Posted by Skipper at 00:05