The GPS I'm using insisted that we take route 1 through Miami. I didn't know the area well enough to argue until we were stuck in a clusterfuck of traffic, roasting in the heat and moving at about 2 mph. I pulled out my phone and found a new route, but we still had 6 miles to go in the overheated crush. I had a brief moment of comic relief when I saw a man riding a motorcycle while wearing a tuxedo and bowtie.

We camped a short night in Everglades National Park, where we found a friend from the last campground and talked birds for a while. We had a very classy dinner in Kendall (for which I'll be reimbursed when the paperwork goes through) and rolled out early the next morning toward the Keys. 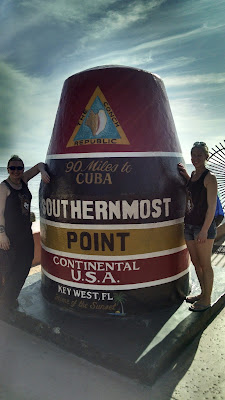 If you haven't experienced the Keys before, they're a little strange - a long chain of islands with a single road running through them, 100 miles from top to bottom. Some of them are natural, full of plants and sea birds and coral, and others are very commercialized, like Marathon and Key West.

It took us about three hours to reach Key West, where we met up with family friends Harriet and Ray from home. They're spending their winter in a camper in Florida and Louisiana, avoiding the cold and seeing the sights much like we are. They bicycled out to meet us on the main road, showed us good motorcycle parking, and we changed into summer clothes and went on a wander.


They led us down to the docks, and we were ambling through Bight Marina when I heard someone say, "Skipper?"

In an area so full of boaters, I decided they couldn't possibly mean me and ignored it. But a guy pulling a wheelbarrow had stopped in my path and was staring at me.

I put my sunglasses on my head and found that he was, in fact, looking directly at me.

"We met at Wildfire," the guy said, and suddenly I pictured him with a giant beard where now there was naked chin, and solved the mystery.

"Sam!" I said, and gave him a hug. "Holy shit!" I'd known him as a fire performer a couple of years ago, and the last I heard he had gone off to work on boats. I assumed I'd never see him again, but sometimes the world is a surprisingly small place. 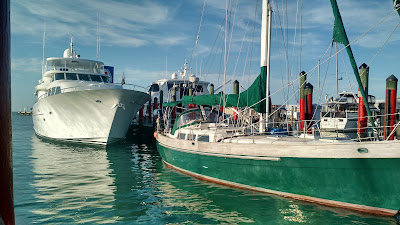 From that unexpected encounter we went to lunch and had some excellent fish and chips, then walked to the southernmost point of the US and took the obligatory photo.

We walked several miles by the end of the day and learned there isn't much for beaching on Key West, but there's a lot of awesome art. Rogue and I said good night to Harriet and Ray, who took off on their bicycles, and then went for a snack at a local hotel. We were on our way out when Sam texted me and said he was off shift and if we were still around, we should get a drink.

With three hours still to drive back before we could even set up camp, I hesitated, but decided driving late was worth it to see an old friend. At the Schooner Wharf we met up with him and his girlfriend Danielle and had a great time catching up and talking about nomad life. He and she live similarly to the way we do, just on the water instead of on the road. The travel perk and weather exposure are similar, although they get paid, while we're in search of work. 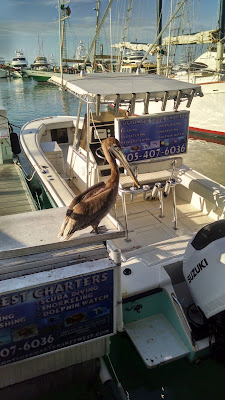 It was 1 o'clock the next morning before we popped up our tent back in the Everglades. Our original intention had been to camp in Key West, but when I saw the cheapest site was $60 just to tent, I decided I'd rather make the drive.
Posted by Skipper at 10:45