The Leak in the Bumblebee

Saturday was a 400-miler, covering the distance from Orlando to Flovilla, Georgia, where Rogue's friend Lucas lives. He had offered us camping space in his huge back yard, among the trees and the owls. The GPS dropped us at a random field on a country back road, and Lucas had to come find us. Fortunately we weren't far from the correct destination.

His two dogs immediately became our new best friends while we chatted about bikes with Lucas' dad, who had done quite a bit of riding himself before his bike was tragically stolen off his back porch. He assured us that we could put our bikes in the basement.

Two average-sized bikes could probably have fit just fine, but the touring panniers give Bee and Zee very wide badonkadonks, so Zee's rear hung out the door. Any thief would have had to run over our tent to get them out of the garage, though, so I wasn't concerned.

The run westward to Flovilla was a last-minute addition to our plans, and an idea had hatched during our day's ride. While Rogue and Lucas talked games, I poured over the atlas, finding familiar points and estimating distances. Satisfied that my idea was workable, I closed the giant book and grinned at Rogue until she asked what was going on.

"We're gonna have some fun tomorrow," I announced.

I went to bed without enlightening her, but filled her in on the details the next morning. The Tail of the Dragon would have been a rude surprise.

Atlanta was a scant hour away, and the infamous section of 129 didn't look too far beyond that, but just before we reached the foothills we hit a snag.

Remember the first time I tried to park on Jessie and Tyson's sidewalk and dumped Bee in the lawn? That incident precipitated a strange issue where she smelled like gas for the first 50 miles of every tank. I looked for leaks and didn't find any, and texted a couple of friends for advice. One of them suggested there was grit in the throttle bodies, and the other mentioned the vent hoses. Not desiring to disassemble the Bumblebee, I let it lie.

Parked at a gas station with a full tank in the northern realms of Georgia, I glanced down and was dismayed to see gas dripping onto the engine bars. We had been gearing up to leave, but at that I hucked all my loose gear onto the sidewalk. 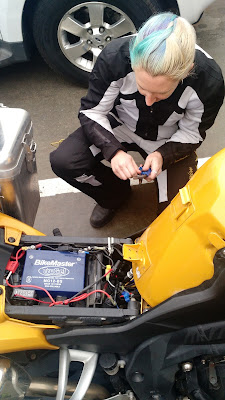 "We're gonna be here a little longer than I thought," I announced, removing the dry bag from the back and then the seat from the bike. Rogue supplied us with coffee while I got out the wrenches and set about removing Bee's various panels.

While I worked, Rogue took the opportunity to remove Zee's front fender, which was mysteriously contacting the tire. After some inspection, it turned out that the new tire that was installed right before we left was too large, and was actually wearing its way steadily through the fiberglass. Unfortunately there was nothing to be done about it. 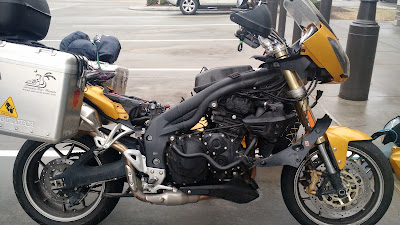 Bee continued to dribble, making a stinky puddle around my feet while I worked. At last I pulled off the fuel sensors and vent hoses and removed the gas tank. The air box underneath was dry, so I picked up the tank itself and inspected it.

The spot between the tank and the front strut was seeping, a slow but steady stream of gas emerging from the weld line. There was nothing to be done about that either, so we put her back together.

Strangely, the only person who stopped to ask me if I needed any help just happened to be a welder. I already had the tank remounted, but I explained to him what the problem was. He made a chagrined face and said he wished he could help, then wished us luck on our journey. 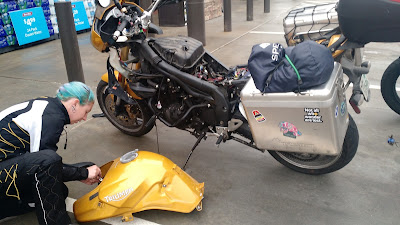 "I run half tanks until I can get this fixed," I answered. I already knew the leak was in the top 50 miles of the tank, which still left me 100+ miles per fill-up.

"You sure you want to ride the Dragon with a leaky bike?" she asked.

"Where should I ride with a leaky bike?" I responded, and off we went into the mountains.
Posted by Skipper at 21:17