The Dragon and The Killer

When Frank got home from work at 4 o'clock on Tuesday morning, his footsteps snapped me awake, and that was that; I was up for the day. I loaded all my things, which had gotten strewn remarkably thoroughly into corners over the four days I'd been there, back onto the bike, and was on the road in time to watch the sun rise. I stopped again 140 miles later for gas, and took a stretching and biscuit break with my coffee. Some locals in the gas station talked to me about the Tail of the Dragon, where I was headed, giving me warnings about cops and other drivers.

Once off of I40, the road went through farmland and then into foothills. We followed a beautiful river, the road hilly and winding and shaded by trees. The curves got more interesting as we progressed toward Deal's Gap. We passed a couple of touristy-looking places offering Dragon stickers and T-shirts, and out of nowhere I suddenly found myself barreling into a hairpin turn.

Holding on for dear life and looking as far into the turn as I could see, I leaned what felt like most of the way to the ground and dragged us through it. It was an ugly thing and we came a hair's width from going into the woods, but we pulled out of the other end intact. Shaken, I stopped at the next pull-off and prodded my GPS.

I'd told it to direct me to Deal's Gap. What I had failed to notice is that the Gap Resort is at the north end, and we were coming from the south, so while I thought that we were still eleven miles away, in reality we were already in the Tail.

I put on my jacket, realizing I'd entered into something that might be a little over my head, and suddenly I felt relatively likely to bite it somewhere in the next ten-point-something miles. Then I started my music back at the beginning so I wouldn't have to touch it, took a deep breath, and rolled out again.

No one came up behind me, for which I was grateful; one of the locals had warned me that people would speed right by me in tight turns with inches to spare, and I didn't relish the thought of that. The Dragon was breathtaking. The only thing that could have made it more extreme would have been cliffs in place of the trees, like the road up Pike's Peak.

Since I didn't know the road, I took it cautiously; it was peppered with decreasing-radius hairpin turns. It wasn't my prettiest riding, but I got through without hitting the ground. By the time I reached the Deal's Gap motorcycle "resort" on the north end, I felt like I had had several successive heart attacks, and I was ready for some time on my own two feet. I parked Bee in a long row of other motorcycles, all varieties from trikes and full dressers to little crotch rockets and everything in between. 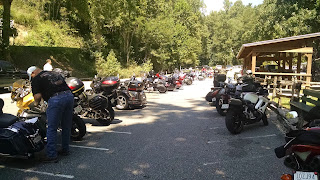 I admired some of the bikes, the area map on the porch wall, and the Tree of Shame in front of the motel. I almost headed out then, but told myself there must be another lone biker in the area who could be interesting to talk to, so I ordered a bratwurst at the grill and took a seat in front of the window where I could people-watch. 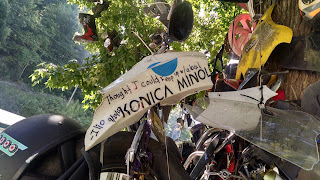 My number was called, and I picked up my chili dog and headed back to my seat. On my way I crossed paths with a man removing his gloves and jacket, and we nodded cordially at each other. He placed his things a few seats away from me at the window countertop, walked away, and reappeared shortly with food. 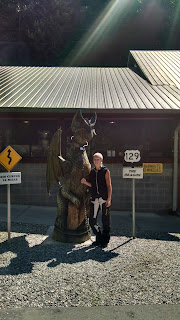 We exchanged the standard "how are ya where ya from whattaya ride." He was Herkimer*, from Toronto, riding a sport-touring Honda. He had a motorhome parked in Pigeon Forge, and he was on his way to ride some favorite roads in northern Georgia. He asked how I liked the Tail, and I said it was a little intense but was a great experience. He agreed that it was intense, and ranted about how much he hated getting stuck behind parades of full-dress riders crawling through the turns.

We got along well, and he asked if I wanted a riding companion for some way. I said sure, and that I guessed my own skill level to be somewhere between his and that of the parade riders; I overtake plenty of people, but there are plenty of people who can overtake me, too. I'd seen some sport riders tearing through the Dragon in the southerly direction that just made me shake my head in awe.

Heading outside with sodas in hand, we introduced each other to our bikes. His looked to be on the sporty side of touring, though it probably appeared different with luggage on. Bee was so loaded down that she was clearly leaning toward her touring capability. 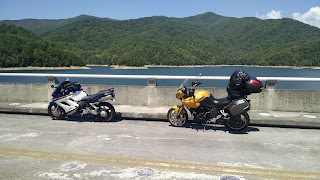 Herkimer and I geared up and headed east on 28, stopping at the dam to enjoy the sites. His pace was great, fast enough to push me but not enough to lose me. The route was twisty without being terrifying, and I had a great time sailing along through curve after curve, enjoying the scenery and the sunlight and practicing transferring my weight with my feet. We stopped at the dam a few miles out. 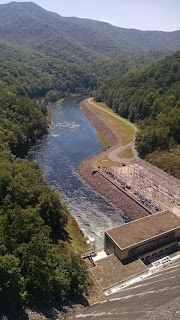 We stopped for gas a few miles south of the Blue Ridge Parkway. I asked him if the jerky power transfer I'd been experiencing with Bee for a couple of days could be an issue with the chain, and he asked when was the last time I had tightened it. I told him I hadn't and didn't know how, because Bee is the first chain-driven bike I've owned.

I laughed and protested that I had been good about oiling the chain and didn't think I'd need to know about tightening it until I returned home.

"Well, put it up on the stand and we'll take a look," he said. I said I had never successfully gotten a bike onto a center stand in my life, and he gave me a look.

"Sure," I said. He grabbed Bee and wrestled her onto the center stand. He was shorter and quite possibly lighter than I, and suddenly I was more confident that I could do it, too.

"Step here," he said. "Push it upright and feel for the feet." That was an essential step I'd never learned. "Now grab here." Bee's passenger foot pegs have a curved mount that's a perfect hand hold. "Step down and pull up." She went halfway up, then down again as my foot slipped. "Use the bounce." I pulled again, and suddenly she was up.

I practiced pulling her on and off the stand a couple of times, and then he inspected the chain. He didn't think it seemed loose, but said we could try tightening it a little bit to see if it relieved the power transfer issue. After several tries at breaking the axle bolt, however, we came up short. I threw some oil on the chain and we moved on.

Headed into the Blue Ridge, he let me lead, which was probably his mistake; I missed the turn for the Parkway twice, once going north and once going south. Then I turned south when I should have turned north. Finally we got on the right road in the right direction, and for a while there was great riding. Then we encountered a pair of slightly slower bikers - although I have to give them credit for only being a little slower despite riding Goldwings - and then a much slower car. I don't like passing lines of multiple vehicles, so the last few miles were just chilling out and trying not to be too annoyed.

I exited the Parkway toward I26, Herkimer still behind me, and stopped.

He told me he was going south on 81, then, "It's too bad you're not staying closer tonight. We could go get a beer."

I thought about that and decided it was a good idea. "I can camp before 81," I said, pulling out the atlas to find a likely spot. We bought a six-pack at the gas station, did a few miles on 26, stopped for takeout at a Bojangles, and found my campsite at Rocky Creek in Unicoi, Tennessee. I was fairly annoyed to have not made it out of Tennessee for the day; Wednesday was looking longer by the minute.

Herkimer popped a top while I popped up my tent, and then we dug into our fried chicken. At long last I understood so many people's enthusiasm for fried chicken. I guess I'd never had the good stuff before. I hate to admit that it came from a fast food chain, but damn, it was amazing.

I told Herkimer I did roller derby, and asked for something interesting about him.

"I'm a certified scuba diver," he said. "And I love to fly airplanes. I like riding because it's the closest thing I've found to flying."

He was starting to seem a little James Bond-ish. The more he talked, the weirder he got. I was beginning to get a sense of some underlying current that I couldn't put my finger on.

"I never ask my clients what they do," he said of his work.

"Oh. Okay." I refused to give him the satisfaction of a what-the-fuck reaction. There was a pause.

"I love that you just rolled with that," he said. I think he was grinning, but it was too dark to be sure.

"Whatever," I said. "I don't really see the point in you socializing this much with a target."

"Unless I'm just doing it to mess with you," he said, and then, "I really shouldn't say that out in the woods in the dark..."

"I'm not worried," I said. He had stepped a couple of inches closer than I liked, and I sat on the picnic table to give myself some space.

"Something like that," I answered. I never tell anyone exactly what I do or don't carry for self defense. The element of surprise is one I prefer to keep close. When he asked about other things that I do, I told him I dance. I don't share my self-defense skills, either.

When it came time to exchange phone numbers so we could do some riding in the future, he pulled out a phone with no numbers in it and added me as his only contact.

"It's my burn phone," he joked. "Actually, it's my American phone."

"Sure it is," I said. At that point I was ready for bed and looking forward to having my campsite to myself. But he said he didn't feel ready to ride just yet, and I'd never push someone into riding after drinking, so I told him he could stay as long as he wanted. He hung around for another half an hour, standing awkwardly in the dark. I couldn't figure out how two ciders on top of a box of chicken had given him even the slightest buzz, but it really wasn't mine to judge.

He never told me what he did for a living. When I mentioned that I blog, he immediately told me to leave his face and name out of my writing. It wasn't until the next day, when I'd been alone in my helmet for several hours, that I assembled all of his strange clues into a whole picture and decided that he was either in witness protection...or he was really a contract killer.