We met up again in Strasburg and took an afternoon to explore the town. It was a short afternoon, and probably half of it was spent conversing with the owner of Tippy's, an adorable bakery in a slightly-renovated house downtown. While we ate our peach pie and strawberry poundcake, she told us the town was fighting a decline as parts of it were deserted and turned into a ghost town. 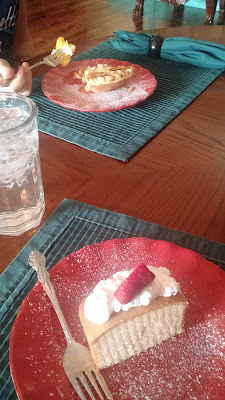 If the rest of the places were like the tax advisory, I could see why. Their hand-lettered signs asked, "Are taxes making you loose [sic] your mind?!" One had been corrected with a cross-out, and another had one of its letters backward. I looked for some indication that it was a joke, but found none.

The next morning I attempted to lead us into Shenandoah National Forest but must have missed a turn somewhere. It was still a lovely ride through rolling farm country under a sunny sky. I guessed at a couple of turns and eventually found my way. We stopped at a bookstore for coffee and parked next to a trio of bikes: a Ducati Multistrada, a Triumph Tiger 800XC, and a smaller, sportier Ducati.

We had finished our coffee and were trying to decide where to go next when the riders appeared. I asked the Tiger owner about his ride; it was my first time meeting another Tiger in the wild. He suggested we take 42 south.

It sounded like a good idea and then I missed the turn for 42. Half my travel decisions are made by accident. We continued westward into the mountains and found some nice twisties in our path. In Brandywine we stopped for gas, and another rider pulled in behind us - on a Tiger 800XC. The bike was the same color as the one I'd seen two hours earlier but it was a different bike with a different rider.

We chatted with Rich for a little while, who had moved to West Virginia from Florida, if I'm remembering correctly. He got rid of his cruiser so he could commute year-round on his Tiger, tackling the snowy mountain passes every day on two wheels. And I thought winter in Massachusetts was a bad place for a motorcycle.

We had left the Blue Ridge because Mike told me all the campgrounds were closed for the season. The gas station clerk assured us that the Brandywine campground was also closed. Rich told us there might be camping in Seneca Rocks, but after thirty more mountain miles we found a closed gate.

Thinking we could find a place to renegade camp in all those lovely woods, I took a random left and went tearing up a dirt road. There was a stream on the left and a steep hill on the right, and it continued that way for miles...up a steep hill, into some gravelly switchbacks, over the crest, through some farmland...

Forty minutes later we found pavement again, and still there was no place to camp. I followed a sign for Spruce Lake down a particularly gravelly road, and fewer than two miles later was rewarded with a sign: Monongahela Dispersed Camping Area. I stopped at the first pull-off, bouncing up and down with glee. I'd stumbled on exactly what I was looking for by complete chance. 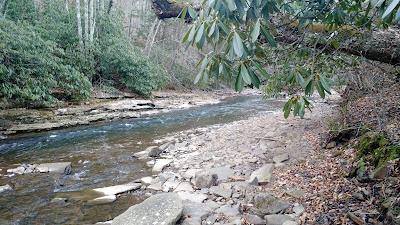 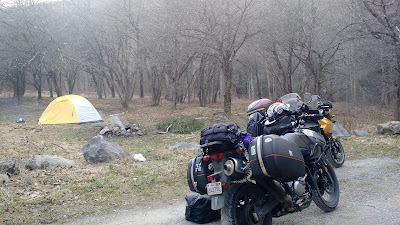