Rogue and Zee Are Broken

It was Tuesday afternoon and I was rolling my underwear into packable shapes when my phone rang. Rogue had gone out to get a shirt for the trip, and was probably calling to see if I'd remembered what I wanted from the store while she was in it. We were set to leave at 6am.

"I crashed," came Rogue's shaky voice over the phone. "I think I broke my collarbone." 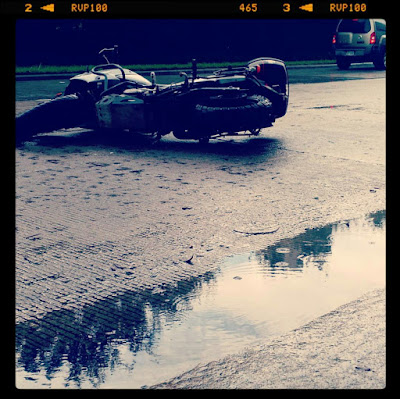 I dropped the underwear on the floor. "Where are you?" She gave me directions, and I shoved my boots on and ran outside. It was raining, but not too hard to ride. I took off for Westheimer and promptly got lost. Rogue knows that section of town a lot better than I do.

After some side-of-freeway texting, interrogation of my GPS, and lane-splitting down the 610 feeder, I found Rogue in the back of a police car in the parking lot of a hotel. Zee had been pulled from the street by some good Samaritans, and the cop was willing to drive her to urgent care.

The story as I understand it is that someone stopped suddenly in front of her, because that's what Houston drivers are good at. When she tried to stop, the bike lost traction in the rain, started to slide, regained traction too late, and threw her off. Her knee, elbow, helmet, and bike all show the marks. 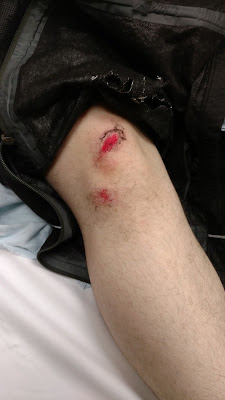 Fortunately, the helmet did its job and her head was uninjured. Her collarbone didn't fare so well, though. An x-ray confirmed her fear of a fractured clavicle, and she walked out of urgent care with her arm in a sling.

Zee ran and rolled but I didn't trust her in Houston traffic, so we left her at the hotel for the night. What was supposed to be a going-away party at the house became a get-well-soon party. Rogue insisted that I should continue on the trip without her, and I didn't protest too much - she'll have more peace and space to heal without me there, and I know there are plenty of people in the house who will help her out if she needs anything.
Posted by Skipper at 00:25

Email ThisBlogThis!Share to TwitterShare to FacebookShare to Pinterest
Labels: weather