Friday morning I woke in a state of confusion. What was this strange room? Where was I? Had I gone to Dallas? No, that didn't seem right. Was I...on a bike trip. At Dawn's. In Arizona. About to spend another grueling day in the desert. I wished I could go back to sleep.

When I stepped outside, I was surprised to find the air very pleasant. I grabbed my flip flops and took a walk down the hillside into the desert, picking my way carefully among the rocks and the thorns and the spikes. I'd never seen a live saguaro until the day before, and I wanted to get up close and personal. 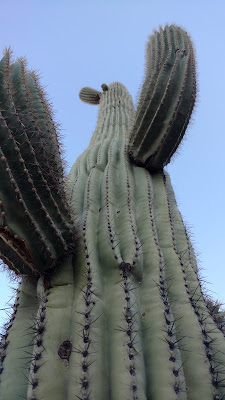 When I returned to the kitchen, Dawn and Virginia had made coffee. We ate breakfast on the back porch with the pups and watched the sun creep over the house and down the hill. When I started to feel myself sweating again, I put my things on the bike and rolled out. 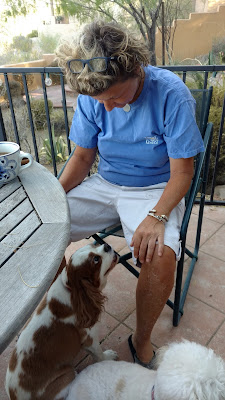 The heat was immediate this time. I don't mind hot weather riding - I was comfortable crossing Kansas when it was 95, and I've become accustomed to daily commutes around Houston. But the desert was a new animal. Mile after mile after endless mile of dust and rocks, scorching sun and blistering asphalt chipped away at my resolve. Every stop ended with me soaking my face cloth in a sink and then dumping a bottle of water down my jacket. In twenty miles it was all dry again.

I did have one bright moment. Somewhere in New Mexico I'd come across a biker stopped on the shoulder, hiding in what little shade he could find, and I'd stopped to see if he needed help. Walt had run out of gas but help was on the way, so we chatted for a few minutes and said maybe we'd see each other again on our mutual way toward LA. Making my way along in the desert the next day, I saw a blue BMW merging onto the highway ahead of me and realized it was Walt. We waved to each other and then were separated by traffic, but it left me with a smile.

At Chiriaco Summit, I stopped to cool off. I didn't need gas, but my head was starting to swim. The scenery never changed and the heat was unbearable. I couldn't pour enough water on myself to control my body temperature. My helmet had ceased to be a hiding space and instead become an oven in which to roast my brain. 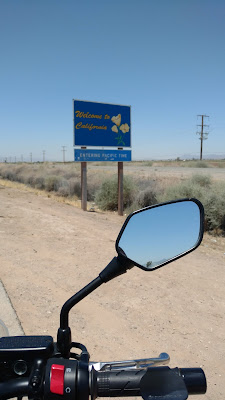 At the counter in the cafe I ordered a lemonade, then tried to decide whether it was smarter to eat or not to eat. The decision was overwhelming. I stared at the menu for way too long and tried not to cry.

How much longer would I be out here? I couldn't look; there was no cell service and the WiFi didn't work. I didn't know how many miles I had gone already. I thought about my plan to find a camping place that night and just couldn't do it. I decided it would be a hotel night, for the sake of my sanity. The desert was so damn big, and I'd failed to account for it properly in my planning.

I ordered a soup and salad, ate less than half, and went on my way again. The next sign said I was 140 miles from Los Angeles. I stopped again 30 miles later to get gas, hoping it would be my last desert stop.

It was. We pounded on for another 80 or so miles, and then the road started to climb small hills and stopped being completely straight. Then traffic came to a standstill.

I took a deep breath, holding on carefully to my patience, hoping whatever was wrong wouldn't last. It was much too hot to be sitting still on top of a hot engine.

That's when the first lane splitter sailed past me. I swear the rider stared at me in puzzlement as they went by, though of course I couldn't see through the helmet. That shit's legal here.

I jumped into the breakdown lane and rolled past all the cars. I do it occasionally in Houston, another place where it's too damn hot to sit still on a motorcycle, but it's with the knowledge that any cop who catches me will have something angry to say. In California, I was home free. The traffic jam disappeared in my side mirror in no time.

Over the crest of a hill, the temperature dropped abruptly, and I started to see signs of civilization. I wondered how hot it still was; it felt almost chilly. When I passed a thermometer sign that said 91°, I was surprised at how cold that felt. 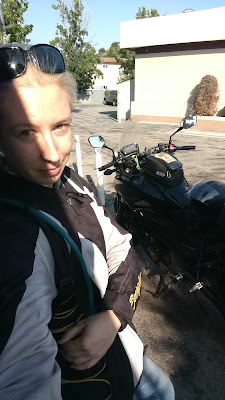 I stopped for gas in an eastern suburb of LA and made myself a hotel reservation in the Ventura area. The last hour of the ride was pleasant - the road wound around the base of the hills, and the scenery was full of trees and flowers and blue sky. Eventually the highway-scape gave way to farmland, and I realized I was driving through strawberry fields. The air smelled heavenly.

I pulled into the portico at the Holiday Inn Express in Port Heuneme as the sun was brushing the horizon. I was actually cold, and I could smell my sweaty jacket even with my helmet still on. It was past time for a shower. I'd gotten a good deal on a room from Priceline, my favorite booking site, and was stunned when I walked in - I had a whole suite to myself. I enjoyed a shower in the beautiful bathroom and then walked across the street to a Thai restaurant, where I had a wonderful if lonely dinner. 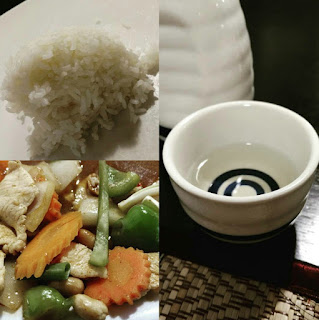