Tuesday started even earlier than Monday, since I'd added 250 miles to the agenda by staying in Wendover. I was up at 5am and had wheels rolling by 6am. A beautiful sunrise over the flats was a great start to the day. 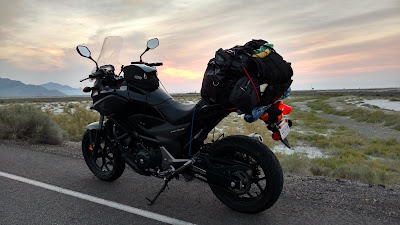 I was fighting through traffic around Salt Lake City by 8am and almost crashed when the cars in front of me stopped dead from 70mph. I managed to dodge into the HOV lane and escape. The weather was beautiful and so were the lakes scattered along the road.

Close to midday I met up with I70 and took a break. Several other bikers were also hanging around the gas station, and I went to chat with one who had parked nearby. I'd parted company just hours earlier with Jon, world-touring rider from Britain and leader of motorcycle tours, and now found myself speaking to John, world-touring rider from New Zealand and renter of motorcycles to tourists. I had to smile at the irony. One day I'll join their ranks by riding outside my own country. 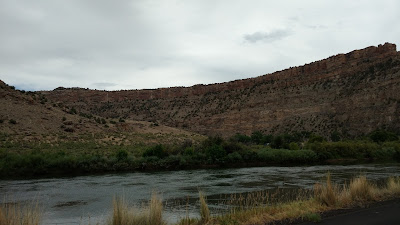 The ride into Colorado was warm, scenic, and uneventful. I'd planned a gas stop at exit 142 on the western slope, in the town of Palisade. When I took the exit and saw a sign for Meadery of the Rockies I added a stop. I ended up chatting with a couple who had lived all over the country and done some motorcycle touring in the west, and got a camping recommendation from the woman working at the meadery. The mead was quite good as well, and I bought a bottle to bring to Steve and Ann. 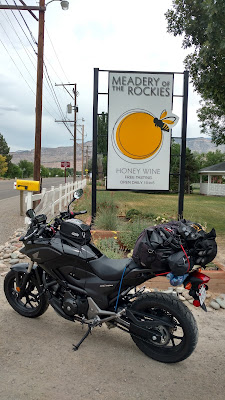 It was warm in Palisade, so I continued on wearing my jeans and armored jacket without the liner. By the time we topped 10,600 feet at the peak of Vail Pass, I was freezing. I like to combine the purposes of my stops, though, and there was no gas in Vail or East Vail, so I rode on. The highway was busy and traffic was flying even though the curves were tight, and my attention was drawn by a loaded tractor trailer doing 85mph and passing cars and other trucks. Signs placed at regular intervals warned of brake failure, and the whole situation concerned me. I stopped at Copper Mountain, where I paid $3.22/gallon for 85 octane and more than $6 for a spinach and feta croissant. Somehow I thought that a gas station in the summertime would cost less than a ski resort in the wintertime, but obviously not. 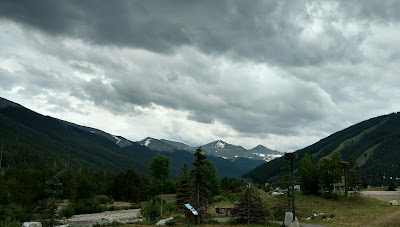 A few rain squalls near the bottom of the eastern slope soaked my jeans and gloves, but I only had 30 miles to go and decided to wait it out. The rain stopped and started and stopped and started, and was gone before I got on 470. I showed up at Steve and Ann's perfectly dry, like it had never happened.
Posted by Skipper at 00:34