Hopping through two time zones had me up early on Sunday morning. Jesse and family built a lego pyramid and then made pancakes while I packed. When I was ready to go, Jesse suggested a photo of the kids with my bike. 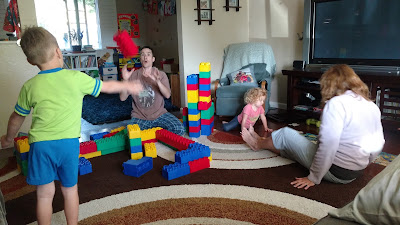 "My pancakes are going to get cold," the 5-year-old protested with a sigh, but followed us outside anyway.

I stopped downtown at Rrag's for a breakfast sandwich, which took a strangely long time to make. I didn't eat it there, but stowed it in my luggage and rolled south into Oakland. There I parked at the entrance to the Mountain View Cemetery, and before I even had my helmet off I saw my friend Caroline walking toward me with her dachshund Lily. 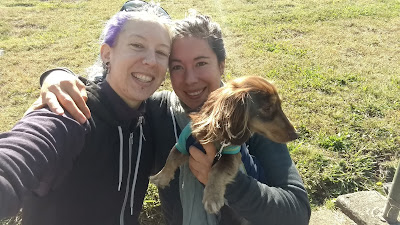 I got in her car and she drove us to what felt like the top of the city, where we sat on some steps and caught up on life. We met in third grade and became immediate best friends, and although we tend to go years without seeing each other now, the friendship is always just like it was. As a bonus prize, Lily is one of the very few small dogs that I actually like.

As I was leaving the cemetery, my sunglasses fell off my luggage. I noticed they were gone as I stopped to set my GPS, but by the time I located them, they had encountered the heavy end of a car and were shattered into many pieces. I mourned their loss - I've never had a pair I liked better, that were big enough to block all the sun, narrow enough for my thin face, and perfectly shaped to fit under my helmet. I'd looked for another pair like them before and never found anything close. I'd have to go with the first thing I could buy though, because the sun on the California highway was in it to win it.

But first I stopped at a coffee shop near the water, where I found Gabriella, another friend from grade school. We hadn't seen each other since we were 9, and it was interesting to find out what each other had gotten up to in all that time. I've found most people adopt new names as they grow up, and sure enough, she goes by Brie now. I neglected to get a photo with her, something I'll remedy the next time I ride through California. 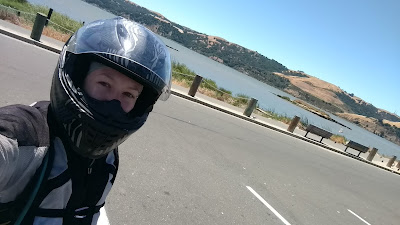 Around noon I purchased some gas-station sunglasses and then hit the road to make miles. The vistas were sunny and beautiful, rolling hills covered in golden grass and dotted with trees. After a while the road became more twisty as it entered mountains and the sight of a snow-capped peak started to tease me, appearing here and there around corners and through trees.

A guy riding a sport bike merged onto the highway and I gave him the two-fingered biker wave, intended to say a passing hello. He took it as a desire to race, and he dropped in beside me and then opened his throttle. When he realized I wasn't following, he fell back behind me and gestured and nodded. I kept my eyes on where I was going, having no desire to get into a corner-carving contest with this guy in his khaki shorts and skateboarding sneakers. Eventually he moved away and then took an exit. 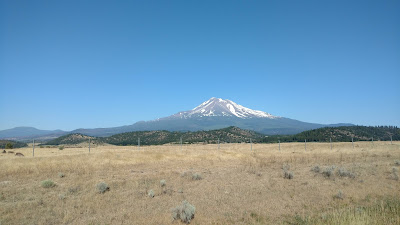 The road signs told me that I was seeing Mount Shasta, and when I realized that 101 went rather far around it, I stopped for a picture from the highway. It was an area I would have loved to explore, but I was already looking at a nighttime arrival on Agate Beach and I didn't want to make it any later.

There is no right way to dress for riding those mountains. The lower stretches were a toasty 95°, which made staring at the snow on Mount Shasta a rather disconcerting experience. The higher passes were colder, dropping into the low 60s and making me shiver. From the protected interior of a car, you can't tell how much the temperature changes around you, but a rider feels every degree. Looking at the temperature is just an estimate, and nearly useless when riding through changing elevations. Here it's 80°, and then you come around a corner and it's 60°, and then down in this valley it's 90°, like swimming through a pond and finding that suspicious warm spot where your friend was treading water a minute ago.

When I do long milage days, I find creative ways to change my position on the bike. One of these is to lie down on my tank bag with my left elbow draped over my clutch lever. I don't like to spend long in this position, as I can't see my mirrors from it, but sometimes a couple of minutes is all that's needed. I was sailing up a straightaway in this bent-over position when a black SUV pulled up and paced me on my right. I glanced over and with a sinking feeling noted the CHiP insignia. The officer pointed angrily at my front tire and mouthed something that rhymed with "Motown."

I had no idea how fast I'd been going, but I rolled off the throttle and nodded to him. I tried to pull into the center lane behind him, but he continued to pace me so I was forced to go in front. Then he pulled into the left lane and started pacing me from the other side. There was a strange noise, and I realized he was saying something to me over his PA system. Through my earplugs and full face helmet I had no idea what it was; all I heard was "wah wah wah" like Charlie Brown's teacher. He might have said "Texans suck" or "Enjoy the mountains" or "Sit up and pay attention, dumbass." Then he sped away and disappeared. 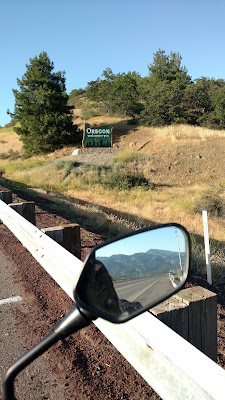 The sun was showing its golden afternoon side when I saw the Oregon state sign. I'd purchased a second new pair of sunglasses, as the first new pair gave me a headache. I made my last gas stop just past sunset, in a town that was closing down as I rolled through. I was the station's last customer for the night. The attendant said he'd let me pump my own gas.

"Is that not allowed?" I asked, confused. 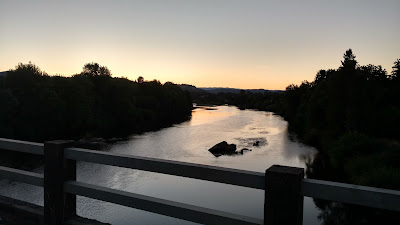 Despite gathering clouds, hints of sunlight were visible in the sky until past 10 o'clock. I forged on through the mountain passes in the increasing darkness, hoping for no deer in the road. I was just thirty miles from the house when red and blue lights came on in my mirrors.

I sighed and pulled over. The officer told me I'd been doing 70, which is entirely possible, but he neglected to tell me what the speed limit was. My combination of Texas plates and New Hampshire license meant I had to dig out all my documents, which were buried in the bottom of my luggage. Fortunately the officer was very kind, letting me off with a warning and then telling me that my intended route was blocked by a landslide and giving me a new route.

He told me to skip the turn for 42S and my GPS would take it from there, but when I passed the turn, Google just told me to turn around. I pulled over and debated. I didn't actually know where the landslide was, and the officer had told me that the alternate route wouldn't be far out of my way. The only alternative I could see on the map added probably 20 miles to my trip, and I was cold and tired and just wanted to get there already. Besides, shouldn't Maps know about any road closures?

I ended up deciding to trust the officer and guess at the location of the road closure. I followed the only way I could see, my GPS protesting all the way that I was doing the wrong thing. The twists in the road tightened and the grade got steeper, and then it started to rain. Wonderful.

Thirty miles, I told myself, shivering. I covered the last few at a snail's pace, creeping around unlit hairpin turns and squinting through my messy shield. Suddenly the road got bumpy, and I was startled to realize it had become gravel. My shield was too wet by then to see through, so I raised it and let the rain beat me in the eyes. The gravel road led around a few more tight turns, and then I was at the gate. I got through but wasn't sure where to go from there. I ended up inadvertantly exploring the neighborhood, climbing a tiny, obnoxiously tight road, where I parked on the lawn of a likely-looking house. It was the wrong house. I went back down, nearly dumping the bike down the hill. Process of elimination eventually led me to the only road/driveway I hadn't tried, and there at last was a welcoming house full of friends.
Posted by Skipper at 19:25