The hotel's breakfast was great - I loaded up on biscuits and gravy and bacon, and took a banana for the road. As I was packing up the bike, a man stopped to ask me how I liked it - he had a wee-Strom and loved it. I think he wanted to talk more, but he kept glancing nervously at the two women he'd been walking with, who were quickly disappearing down the parking lot, and it wasn't long before he said a hurried goodbye and trotted after them.

The morning was cloudy, chilly and damp. A light mist floated down and settled on my skin as I did up the bungee cords, making me shiver. I put on my fleece-lined leggings under my jeans, and my wool sweater and sleeveless hoodie under my riding jacket. Even with all that, I had to stop 30 miles into the ride to add the liner to my jacket. The change in weather was startling but not unwelcome.

At the first glimpse of ocean from the road, I dove into a sandy pullout and came to a stop. The sight marked the official completion of a goal I think I stated for the first time at age 16: to ride coast to coast on a motorcycle. I hadn't done it all at once, taking instead many months, an extended stop in Houston, and two motorcycles to do it. But I'd done it, at long last. The previous days' trials in the desert made it even sweeter. When the road is long, ugly, and treacherous, the end is so beautiful.


But it wasn't the end, of course, just a wonderful milestone. I rode a little bit of route 1 along the ocean, but there were campers lined up along the shoulder and dogs and children running everywhere. I was afraid to run any of them over, so I popped up onto 101. 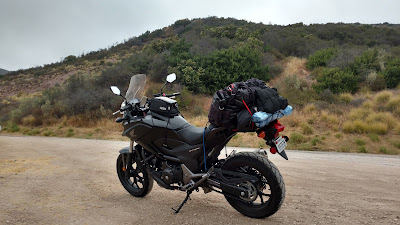 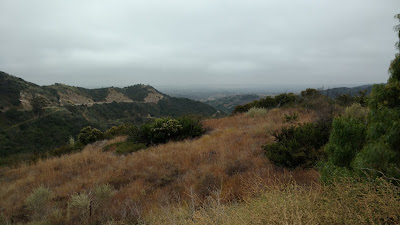 The road turned mountainous for a while. The temperature rose and dropped and rose again. The clouds cleared, releasing the sun and showing me why California is called the Golden State. 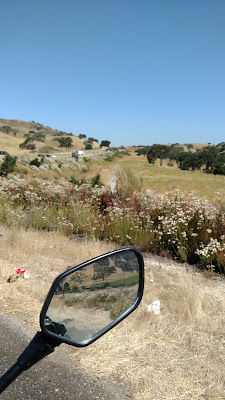 My biker friend Amber from Beaumont saw that I was heading up the coast and suggested a stop at Old West Cinnamon Rolls in Pismo. It was 120 miles from Port Heuneme, so I decided to make it my first break for the day. An almond cinnamon roll and a cup of coffee while watching the town go by were a nice respite from the road. 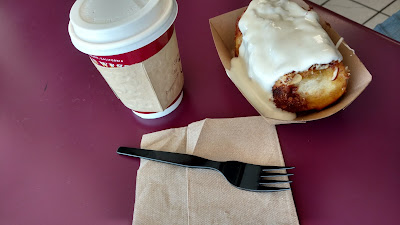 After Pismo, the road turned inland and the temperature soared. I stopped at a random gas station to change out of my warm layers and chatted briefly with a couple on a 1988 BMW.

In the late afternoon I pulled up in front of Rogue's stepbrother Jesse's house in Benicia. He had messaged me on my first traveling day and told me I was welcome to stay even though Rogue couldn't come. I thought it might be a little awkward staying with a stranger, but it wasn't at all. Jesse and his two little kids were awesome, and it turned out I did know someone in the house - his mother Sue was visiting. They made a stirfry and we sat on the back patio and ate dinner and drank wine.


I stepped outside in the late evening to grab my clothing off the bike. As I walked out the door, I paused - something wasn't right. It felt like I was still indoors. That's when I realized how accustomed I've become to Houston weather. If it's not at least 80° and as humid as a pool room, I must be indoors. I laughed at myself, then stood outside for a few minutes and enjoyed the crisp weather.
Posted by Skipper at 01:37