On Wednesday morning, I took off alone. I don't feel guilty about it, because if I were in Rogue's place, I would've insisted that she go. But I do feel bad for her predicament, and I'm sad to be traveling alone again. It's more fun with a friend. 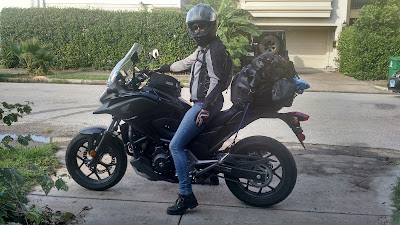 After a quick stop at Stubb's, where the windscreen extension that I wanted didn't fit and so I bought nothing, I got on I10 and went. My whole day would be on I10 - hell, my next three whole days would be on I10 - so I didn't need directions or to pay attention to anything but traffic.

Storm clouds fretted on the horizon but no rain appeared, and the first 250 miles were pleasantly cloudy and cool. That, of course, didn't last - it is the south in the height of summer. The sun came out around San Antonio and the heat started to climb. The air dried out as sub-tropical Houston gave way to desert. By the time I reached Fort Stockton, it was 104°.

The new bike turned out to be very comfortable in spite of the windshield being too short (I'm tall enough that even the touring shield doesn't push the wind over my head). For some reason the miles between 300 and 400 were the hardest, and then I settled in and felt okay.

There were mountains on the horizon as I rode, but they never seemed to come any closer. There were also clouds, and I started to hope it would rain. Coming out of one gas stop the storm looked particularly promising. I saw what I though was a wall of rain crossing the highway, but when I drove through it, it wasn't wet. I realized it was a dust storm. There were some impressive forks of lightning and a few fat drops of rain, but then it stopped and didn't return. 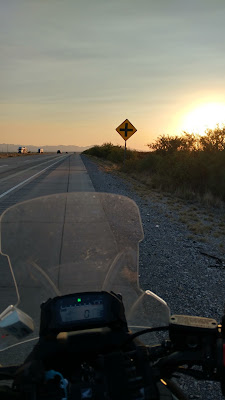 I watched the sun set just east of El Paso. Even though it was past dark, the temperature rose again as I drove through the city. Then on the other side, it dropped suddenly. I pulled into the Super 8 in Las Cruces around 9:30 local time. I pounded out 824 miles in 13.5 hours. My projection had been 16 hours.

I almost sent an "I'm so tired" text out of habit, and then realized that for all the riding I had just done, I actually felt great. Nothing hurt that much. I didn't feel like I was about to keel over. I made my gas-station ramen with the hotel's coffee maker, stuffed my face, and fell asleep. 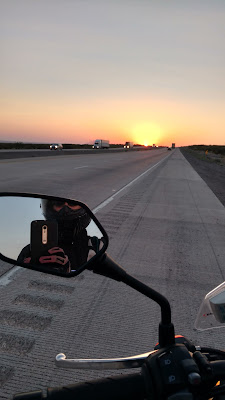