The new bike was missing all the awesome farkles I used to have on Bee - the extended windshield, storm guards, engine bars, highway pegs, electronics...and luggage.

I installed a new 12-volt charging port and a connector for my heated vest and replaced the windshield with a Puig touring screen; those were the easy parts. I couldn't afford engine bars so I started looking for highway pegs that would fit on the frame.

Everything I could find cost more than I was willing to pay, but when I searched for '1.5" bar mount' on eBay, an interesting solution appeared: a set of light mounts for off-road vehicles. They looked like highway pegs, so I bought them as an experiment. They did exactly what I hoped. 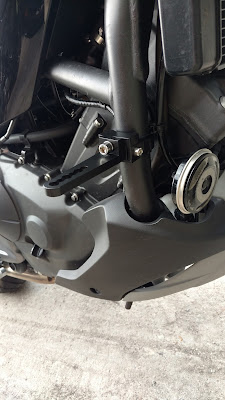 Since the bike has a luggage compartment where the gas tank would normally go, no one actually makes a tank bag for it. I removed the tank foot from my Ion bag, got out some bungees, and got creative. 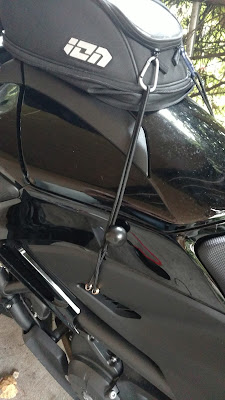 I modified this setup later so it's no longer pulling on the zippers. It works well enough.

I saved the aluminum Zega panniers from Bee, but can't get replacement mounting rails until the end of July. (Thanks a lot, Touratech.) So I pulled out the dry bags and a mess of bungees and a cargo net. 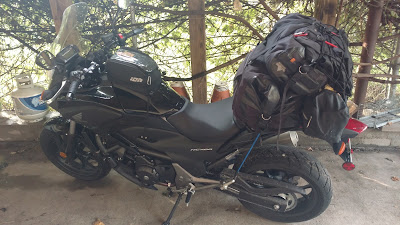 All of this would be fine if the gas filler wasn't located under the passenger seat. I get gas as many as eight times a day depending on my milage. This happens every. Single. Time.