Tuesday morning was sunny, clear, and a little chilly, with an ominous prediction of snow. We drank our coffee, packed up our lives, and exchanged lots of hugs with my mom. Bee required a jump, of course, so I let the engine run while piling on the rest of the luggage and my gear. (I have to remove the seat to jump the battery, which of course requires removal of the dry bag and anything cargo-netted on top.) 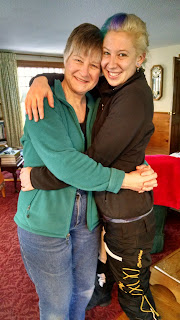 We rolled out west to Keene, where I had a scattering of errands to accomplish. It couldn't go off without a hitch, though - we stopped in Wilton for gas, and I couldn't open Bee's tank. The lock cylinder was jammed and wouldn't turn. I decided I had just enough gas to make it to Full Throttle.

Fortunately that estimation was correct, and Brian was able to get the tumblers moving again. Bee was also blessed at long last with a current inspection sticker. When that was done, I returned my RFID tag to Mutual Aid and said goodbye to Cindy again. We made a stop at PetCo to get Rogue an ID tag, and on the way out of the parking lot I heard a honk. A glance in my mirror showed a pile of V-Strom on the ground and Rogue standing over it with her hands in a "WTF" shrug.

I parked and ran back. Together we uprighted Zee. Rogue was fine; she'd made the same mistake I had when I dumped the Hornet at a gas pump when Cider and I were setting out for Colorado. It's all too easy to stop a little suddenly or a little crooked on a tall bike that's weighed down with gear and find it lying on the ground under you. Fortunately nothing was damaged, and we rode on to find Roy. 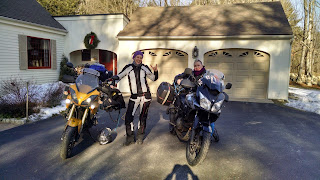 It turned out to be fortuitous that we'd made that two-minute stop. On our way through town, I saw a toaster-shaped copper car, and the driver was waving frantically. It was Snaric, and I gave him a frantic wave in return as we went by. Then we picked up my spare ignition key from Roy, who had borrowed it when he bought the old luggage off Bee.

The sky was starting to cloud over, and I gave it a sideways glare. It was time to beat feet before the storm hit.

91 to the Merritt Parkway to 95 was smooth sailing. Somewhere along the way it began to rain, and by the time we started to see signs for Cranbury, New Jersey, it had been raining steadily for hours. It was dark and cold, my GPS was getting soaked, and my shield was fogging up. I popped it open a hair so I could see, but between the rain and the reflections, it was a tough job.

Eventually we made Hightstown, and I street-parked and called Rocky. As she said hello, Rogue dismounted without getting Zee's kickstand fully unfolded, and dropped the bike by the curb. I threw down my phone and we picked her up again.

The next few minutes were a frustrating and confusing swirl as I talked to Rocky on the phone and she tried to figure out where we were, and Rogue walked Zee across the street to a parking space and then realized she wouldn't start. I went to give her a helpful push and in the dark I grabbed the exhaust can by mistake, burning my hand.

Eventually we got our crap sorted out and dumped our wet layers all over Rocky's mud room. She had an amazing spread of sushi waiting for us, and we stuffed ourselves and caught up with our derby buddy. A little internet research on Rogue's part got the bike problem sorted out, and life started to look a lot more cheerful. 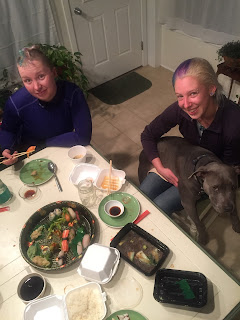 We played a few rounds of a charades-like game called Guesstures, and then Rocky asked if we had ever seen WestWorld. I'd read about it recently and it sounded interesting, so she put it on.

When she eventually went to bed, Rogue and I were still watching, and hooked. If you've got a little time for TV, I highly recommend this show. It's like Surrogates meets Jurassic Park, in which a world full of artificial intelligences start to become a bit more sentient than their creators intended.
Posted by Skipper at 18:02