On Tuesday morning, we called roadside assistance and got Bee towed to Full Throttle in Swanzey, New Hampshire. I had to pay the difference, because roadside only tows as far as the nearest shop, but I don't trust anyone else to put their grubby paws on my baby. Ernie's Towing in Amherst has a guy who specializes in "bikes, antiques, and expensives," and we watched with interest while Kent rigged her up and pulled her onto the truck. With the front and rear suspension compressed, she squatted down and pretended to be a sport bike. 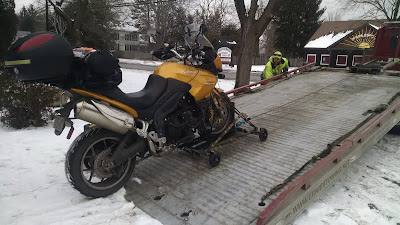 My mom picked us up from the shop, brought us to her house, and made us dinner. Fortunately it wasn't a work day for her, so it was just a pain in the ass and not an impossibility for her to help us out.

I don't like asking for favors, but it's been a week full of them. On Wednesday, Cider met us in Leominster, hooked up a U-Haul trailer to his truck, and drove us all over Massachusetts to get Hades out to Cape Cod, where Rogue's dad has agreed to store her in his garage.

"I told you we'd figure it out," said Cider.

"Creatively," I added. We shared bike stories, road experiences, and a lot of caffeine as we collectively covered several hundred miles in a giant circle.

I'm nearly back to a normal awake-during-daylight schedule, but on our way back from the coast I passed out in the truck. We went over a speedbump pulling into the parking lot where Rogue's bike was waiting, and that's what brought me to consciousness.

"Huh?" I responded, trying to figure out where I was and why she was greeting me that way. I pulled my head from where it had become wedged between the seat and Cider's shoulder.

I blinked and shook off the sleep while the two of them laughed at me.


By the end of the day, Hades was snug in storage, the humans were back in their respective homes, and Zee was in my mom's garage, so at least Rogue and I had one bike between the two of us. My phone, unfortunately, went home with Cider. Apparently it preferred his truck to my pocket.
Posted by Skipper at 10:31