The discussions for this long-term trip initially involved a lot of talk about trailers. The idea of living permanently on the road seemed to call for them, but neither of us could afford to lay down that kind of cash, especially since I wanted a single-wheel. My dream trailer is something like this, from Third Wheel Trailers:


I'd rather have the money for traveling, though, so I started cooking up plans to build my own. I considered PVC pipe, a popular solution for bicycle trailers, but Cider pointed out that it's not really up to the rigors of highway travel. I scoured the Harbor Freight catalog and picked out a small flat two-wheeled trailer, thinking I'd build a structure on top of it, but Drewbag told me that the wheel bearings in those trailers are awful and would probably leave me on the side of a lonely highway somewhere. Besides, there's no hitch for a Tiger, so I would've had to do some fabrication to add a sport-style hitch in the image of the Third Wheel anyway, and I don't have any welding skills.

Over-inspired and under-funded, I even sketched up some plans for a convertible single-wheeled camper trailer, a rolling box that would tip over on one side, open up, and turn into a tiny shelter. It seems likely that one day I'll build my own teardrop trailer. 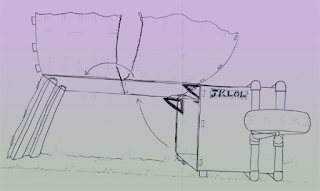