We set off this morning with the intention of accomplishing some errands (Rogue), retrieving Bee from our former apartment (me), and landing at my mom's place by the end of the day. Bee, however, had other plans. I replaced the battery, after discovering that one of the terminals had been not-quite-irretrievably crushed in the mail, and tried to start her. 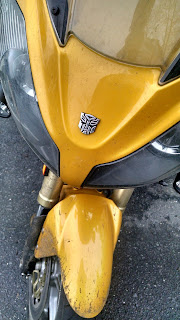 She's a grumpy cold-weather starter anyway, requiring a jump pack in any weather under 30 degrees, but today was a new low. Even with a fully-charged brand-new battery, which cranked enthusiastically for over a minute, she wasn't having any of it. I'm guessing at a frozen fuel line.

I'm going back with the jump pack in the morning to try again. It should be a bit warmer tomorrow, but I have a feeling it's going to end with a tow to my mechanic in New Hampshire. She had an appointment anyway; her arrival may just be earlier, more expensive, and higher off the surface of the road than originally intended.

This is not the first time Bee has screwed with the start of a trip. When Rogue and I went to Texas, we had the same kind of auspicious start. I wouldn't be worried at all except that she's currently stuck in a garage in a place where we no longer live and have no right to store things, and at least one of the people living there seems understandably annoyed by that.
Posted by Skipper at 16:32