It was rainy on Friday morning; nothing serious, just enough to require the rain suits. Seth gave us coffee before going off to work, and we strapped down all our things and headed for I95 again.

Interstate 95 is really nice in the mid-coast area. Up north it's kind of a traffic-filled shitshow, but in Virginia and the Carolinas, it's peaceful and has nice scenery. It's infinitely better than I81, which has been my path through Virginia on my last couple of trips.

At our first gas stop, I considered messing around with Bee again, but decided I'd rather get out of the rain first. I pulled away from the pump, remembered I'd left my phone in my pants pocket, and stopped again to move it into my jacket so I wouldn't sit on it. Then I rolled out.

I swear Rogue was behind me as I left, but maybe I was seeing what I thought I should see instead of reality. Five hundred feet later I was accelerating down the entrance ramp, and when I looked back again, she was gone. I slowed for a moment, and when I still didn't see her, I pulled over into the breakdown lane.

Perhaps she had missed the opening in traffic, or the light had turned. I idled and waited, eyeing the cars and trucks suspiciously. I would have preferred to get further from the lane of travel - off the pavement would have been best - but the ground was a rutted pit of sand that would've led to more problems, like a sideways Bee. I stayed where I was and hoped for observant drivers.

Maybe she had stalled the bike. I waited another minute or so, getting increasingly worried. There was no way I could turn around, but something was clearly wrong. I threw down the kickstand, wished Bee well, and walked back up the ramp to the gas station.

Rogue was sitting in the parking lot astride Zee, apparently waiting for me. I gave her a "What's going on?" shrug.

"I stalled and dropped her," she yelled through her helmet. "And I didn't know where you were."

"I'm on the highway," I yelled back. "Come on." I turned and walked back. She rolled past me and sat behind Bee on the entrance ramp. Fortunately no other vehicles had tested the theory of different masses being unable to occupy the same space at the same time, and we rode off without further incident.

By the time I pulled into the parking lot of a Bo Jangles a hundred miles later, the rain was gone. It was sunny and over 70 degrees.

"I fucking love you," Rogue said, laughing. "I saw the sign for Bo Jangles and I wondered. And then there you went."

I had a laugh at myself too. "I know, I know, I'm predictable." We stripped off our rain layers and tucked them away, then headed for chicken. 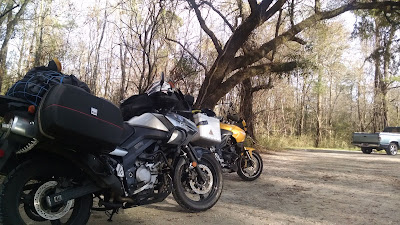 The GPS couldn't locate the campground I was aiming for, but it found a recreation area in the right national forest, so we went there. What we found was a small clearing in the trees and a fishing dock and boat ramp into a river. It was picturesque and peaceful.

I considered filling up my Camelbak pack from a copiously flowing spigot, but I couldn't get to my water purification kit and there was no indication of the potability of the water, so I passed. Still looking for a campsite, I prodded the GPS again and found one called Honey Hill. When I told it to navigate there, it asked me if I wanted to avoid dirt roads. 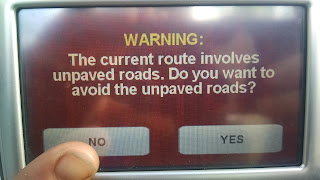 "Rogue!" I called excitedly. "Look at this!" I gleefully pressed No. We have adventure bikes. Let's do some adventuring.

The dirt roads were really nice, except for one section that was paved with the kind of gravel that just grabs the front tire and shakes the handlebars until you think the bike wants to shake you right off. I slowed down, and soon enough we were back on regular bouncy dirt.

The road was scattered with potholes, and we zigged back and forth, avoiding the big ones. I managed to stay out of all of them except one. I saw it coming too late to swerve, so I stood up and bounced through, wincing as the suspension bottomed out. When I glanced in the mirror, I saw my "tank bag" (actually a blue reusable shopping bag netted to the back seat) lying in the road. Rogue stopped beside it, and by the time I walked back, she had all my things put back in.

"You mean I shouldn't drive IN the holes?" I asked with mock incredulity.

"Do what you want," she said. "Just make sure your shit's secure first." I secured my shit and we moved on.
Posted by Skipper at 09:34