Thursday's ride was short, coming in under 200 miles, and blessedly dry. Bee was making a strange clunking noise that at first I attributed to an imbalance in the front wheel, but repeated checks of said wheel revealed no problems. I did notice while flying down the interstate that her right bar weight was missing, and the handguard was flapping in the breeze. The cruise control device had disappeared along with the weight and the bolt. That, at least, I won't miss. It never worked in a way that pleased me.

I honestly couldn't remember whether it had been there when I mounted up in Washington. Possibly it had disappeared overnight, or possibly it had flown off while riding. Either way, it was long gone. We had a brief discussion about whether a bar weight and cruise control would be worth stealing. It seems unlikely that it would come all the way off on its own, as the bolt is a couple of inches long, but it would be an oddly specific part to gank. 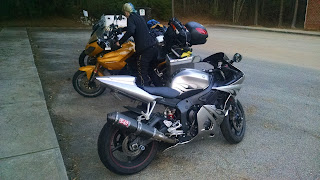 We dropped kickstands in Raleigh with sunlight to spare. It was sixty beautiful degrees as we unpacked and let ourselves into a second-floor apartment.

The place belonged to Seth, whom I'd contacted through CouchSurfing.com. I joined the website a couple of years ago in preparation for my 2015 solo trip, but never actually used it until now. In his profile, Seth mentioned a love of travel and wine, so I sent him a message. When he told me one of his goals was to travel around Europe on a motorcycle, I had a feeling we'd hit it off. 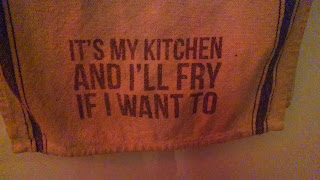 Wandering around a stranger's home was a disconcerting experience. We were chatting via text message, so I knew which room to drop our things in and how to work the voice-activated lighting system, but making ourselves at home without first meeting the occupant felt a little intrusive.

The evening turned out to be awesome. Seth took us downtown and showed us around. He recommended we eat at the Raleigh Times, but it was too busy, so we walked a mile or so to the "other downtown" and went to the Raleigh Beer Garden, which has 376 beers on tap and is enormous. We talked motorcycles and traveling adventures and beer while eating deep-fried giant pretzels with beer cheese dip (I cannot recommend this highly enough) and maple-fried bacon.

From the brewery we moved on to the Hibernian Irish pub, where Rogue and I shared a lamburger. Seth asked if I'd ever eaten mussels, and I admitted I hadn't, so he ordered the plate and gave me one. It was neither wonderful nor disgusting; I enjoyed the process of eating it more than I enjoyed the actual taste. He ordered me a glass of a local brew from Natty Greene called Wildflower Witbier. I don't have a deep enough understand of beer to give it a connoisseur's review, but it was light and pleasant and exactly what I'd look for if I were looking for a beer. (Mead is really my specialty when it comes to brewing.) 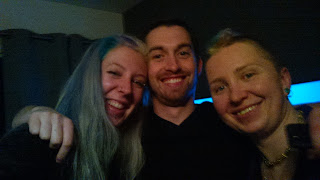 Back at the apartment, Seth showed us a scene from one of his video travelogues, where he'd been riding around Korea with some friends and found a group of horses in the road. They herded them back home using the motorcycles. As a nightcap, we watched an episode of Long Way Round, a travelogue about a motorcycle trip around the world by Ewan McGregor and his friend Charley Boorman.

I'd have to call our first CouchSurf a rousing success. We inspired each other through our travel stories; Seth has a new interest in motorcycling the US, and I have a new drive for making a bike trip overseas.
Posted by Skipper at 20:47