Honey Hill was a cute little camping loop adjacent to route 45 in Francis Marion National Forest. There was one bathroom with no running water, and an ancient sign with a map that smelled like mildew.

"No water," I announced, reluctantly preparing to gear up again. The map said there was a hardware store at the corner of 45 and 17. The clunking noise from Bee had gotten louder, and I would've preferred to stay put, but we couldn't exactly camp without water. I was reaching for my helmet when I saw a spigot in the center of the loop.

"Water!" I said excitedly. I dug out the purification kit and headed for the spout. But it wasn't what I wanted to find. The handle had been removed, leaving it dry. I went for a walk, hoping to find another spout, but there was nothing. Then I inspected the woods, but the only water was swampy and stagnant.

"Want to bring my water bottle?" Rogue asked as I prepared once again to ride out.

"I have a - wait. Water bottle. With water in it." It wasn't as much as I would've liked, but it was better than nothing. We settled in for the night with a pot of soup and a campfire. 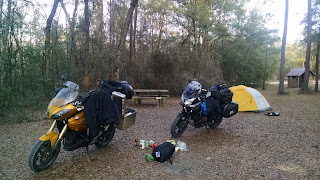 Our plan for the next day was to ride into Charleston and find a bike shop. We stopped for gas 20 miles from Honey Hill, and a friendly guy in a truck told us to be careful, because there were storms coming in. I knew it was going to rain, but I hadn't realized it was going to be a big deal.

"This one has had some tornadoes," he warned us. I stopped, removed my earplugs, and gave him my full attention.

"Any idea how big the storm cell is?" I asked. "We're headed south. Maybe we could outrun it."

There went that idea. I looked at Rogue. "We could hotel it tonight," I said. "I don't really want to play with tornadoes."

"I'm cool with that," she said. "My friend in Mississippi actually just had a tornado."

I borrowed her phone. When I stuck mine in my jacket pocket the previous day to keep it out of the rain, the storm had somehow found its way into my pocket, and my own phone had drowned.

I made a hotel reservation in Charleston while Rogue chatted with the gas station's cashier, who was from Connecticut. His retirement dream was to do what we're doing now - just get on a motorcycle and go.

"You two are living the American dream," he said with a smile.

From there we returned to the campsite and packed up. It was sprinkling as we pulled out, and by the time we were back in the vicinity of the gas station, we were soaked. I drove straight to the hotel. It was too early to check in, but the lady at the desk let me drop my dry bag and tent, and I went to the bike shop relatively unencumbered.

"My bike is clunking," I told the guys in the service department. They came out to have a look.

"Can you tell where?" they asked.

"Just get on and ride about ten feet," I answered. "You'll hear it."

The taller one saddled up and rolled down the road.

"That's the chain," said the brunette man without any hesitation.

The other man pulled a nice U-turn in the middle of the road and came back.

"That's the chain," he announced as he dismounted. I couldn't argue with that level of mutual certainty.

It was Friday, and a new chain and sprockets could be in on Tuesday. The man in Parts gave me the number of another shop to call, but they didn't have the parts in stock, either. I shrugged.

"I really wouldn't drive to Florida on that," the guy from Service added as he walked by.

"I'm okay with that," Rogue said. "I actually really like it here." 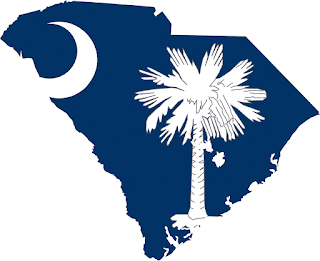 About that time, I heard a roaring noise and looked out the window to see that the mist had suddenly become an epic downpour. The palm fronds bowed and twitched in the onslaught and a thousand drummers pounded on the roof. I admired it for an awed moment, and then remembered something.

"My GPS!" I said, and ran outside to retrieve it. Fortunately it's well-designed in that there aren't any openings that face upward. It was very wet but still working. I stuffed it in my helmet and left my helmet in the parts shop while we wandered the showroom and drooled all over the shiny 2016 V-Strom.

After remarkably few minutes the squall passed, and we headed back out. Rogue recommended the Mellow Mushroom for lunch, and we split one of the best pizzas I've ever had before walking back to the hotel. At long last we stripped out of our soaked clothing, took showers, and threw our drippy things into the coin laundry.

A short walk to Walmart got Rogue a box of the biggest zip-lock bags I've ever seen, big enough to hold her computer and then some. I bought a pepper and some apples, and when we returned to the room, Rogue did laundry and I made lentil stew. We spent the evening smugly dry indoors, eating real food and watching WestWorld.
Posted by Skipper at 10:36