When we were preparing to leave Rocky's she asked if we had something for her to sign. Rogue ran to get a sketchbook, and then Rocky had another idea. 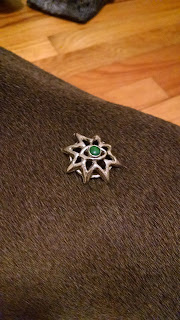 She handed me a small silver object, shaped like a sun, with a green gem in the middle. "I found this in a club in Austin, Texas."

I tucked it away to give to Emily.

We geared up under cloudy but dry skies. It was over 40 degrees, so I stuffed my heated and hooded vests away in the luggage. Someone who had checked the news or possibly Facebook told me it snowed in Massachusetts, and I took a moment to enjoy the timing of our escape.

At the next gas stop, I put the vests back on. Forty degrees at highway speed is still a little chilly to be shedding gear.

We made it to Washington without incident or excitement, although the lack of wind noise on the surface streets allowed me to hear a significant clunking sound from Bee's front end. The tilted street-park didn't let me get her up on the center stand, though, so the investigation had to wait.

We let ourselves into Emily's apartment and were greeted by two frightened furry faces. The cats made a hasty exit from the living room, but one of them returned within half an hour, thoroughly sniffed everything we had brought in, and then demanded cuddles. We were happy to oblige. 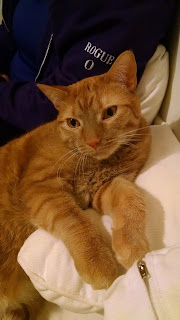 Emily returned from work in the early evening and we made dinner together. We caught up on derby life and watched half of Pirates of the Carribbean, then walked downtown to a pie bar. A pie bar? Yes, that exists, and it's just as amazing as it sounds. It's aptly named: Dangerously Delicious Pies.


Three giant slices of pie later, we walked the few blocks back to the apartment for more kitty cuddles. I gave Emily the silver token from Rocky, and she pulled out a Maryland flag bandanna to pass along. 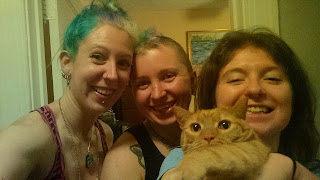 Email ThisBlogThis!Share to TwitterShare to FacebookShare to Pinterest
Labels: restaurants