It wasn't exactly at the top of my list of desires, but eventually I had to return the Hornet to its rightful owner. I seriously considered buying her, as Cider was looking to sell, but I couldn't justify spending brand-new-BMW level money on a toy when I don't even own a car.

Hades demonstrated her dissatisfaction at being left home by refusing to start. We hooked up the jumper cables to Cider's truck, but the starter switch wasn't connecting, and I ended up having to pull it apart and hot-wire her to life. I toddled awkwardly out of the driveway, having forgotten how to ride anything on which I could solidly touch the ground, swerved down the street, and almost failed to stop at the corner. Her brakes require me to grab on for dear life, exactly unlike those on the Hornet.

Possibly fewer than three miles had passed when I realized just how bad the ride was going to be on my back. By the time I exited route 2, there were sharp pains appearing in my low spine, which had been blessedly absent for the last several weeks. I stopped to gas up and do some stretching.

By the time I got home after 70 miles, I realized that replacing my bike wouldn't just be for fun; it was actually going to be necessary for the health of my back. (I have a herniated disc in my lumbar spine that acts up sometimes, and I've been in physical therapy for several months now for that problem.) I started searching Craigslist for options.

The most promising one I found was a 2007 BMW F1200GS in New York. I messaged the seller, who took several days to get back to me and proved to be completely incapable of answering any questions or setting up a time for me to see the bike. This is a pet peeve of mine: if you post something for sale, for fuck's sake, take the time to communicate with people who are interested in buying it. If I send you a polite email asking when I can show up on your doorstep and hand you money, why in the world would you ignore it?

Cider encouraged me to expand my search and named off the sport-touring models of other makers - the Suzuki V-Strom, Triumph Tiger, Kawasaki Versys, and Yamaha Super Tenere. There weren't any local Versys for sale, and the only Super Teneres were too new and expensive. I found a handful of V-Stroms and Tigers, messaged a few sellers, and asked Cider for an opinion between the two.

The V-Strom is a 1000 and the Tiger is a 1050, but Cider advised me (after teasing me for being insufficiently motor-savvy) that the Tiger has a lot more power by virtue of being a triple rather than a twin. I had bookmarked three Tigers, and I made a date to go see the most promising one. It was the same price as the others with more luggage. It lacked ABS, but I'm accustomed to bikes with regular brakes. The seller also had a blessedly competent command of English and the use of a keyboard, which was refreshing. I went to see the bike, made a down payment, then returned home and waited impatiently for the following weekend.

I saw Cider at a game the next day, and he asked if I was getting the bike.

"The bumblebee bike?" he asked.

I laughed. "Yeah, the yellow Tiger."

"Cool. I didn't want to call it that unless you were buying it."

"I didn't want to color your opinion of it before you bought it."

I gave him a what-the-fuck shrug. He protested while Rogue and Kimmy laughed.

Long story short, Jeff, the seller, was conveniently in my neighborhood for a motorhome convention. When he was done with his classes that weekend, I jumped in his Monaco and he drove me back to New York. We talked about travel and biking and life in general. He and his wife have sold their house and are moving into the motorhome to go have travel adventures now that they've retired. We traded emails and blog addresses; you can find him at La Dolce Vita.

He added some accessories and chemicals for me to take, we signed papers, and then it was time for me to go. He took some pictures, gave me a hug, and warned me not to hit the brakes too hard. I made a round of the parking lot to feel out the clutch, throttle, and brakes, and then I was off on my new bike. Bumblebee was named before Cider knew I had named his bike the Hornet, so the similarity is complete coincidence. 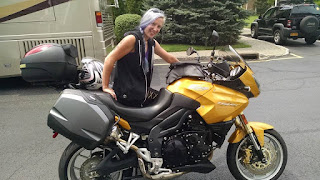