Saturday morning was supposed to begin at 7:30 so I could go get Bee fixed, but I awoke at 9 to a snarky-seeming message on my phone saying "missed alarm." I didn't want to waste hours hanging around the bike shop, so I shrugged, made coffee, and did some blogging.

When Ross got up, he offered to make extra of his smoothie for me, and I accepted. The combination of strawberries, peanut butter, coconut kefir and protein powder was a little strange at first, but after a few sips I decided I liked it. Frank appeared in the living room and was surprised to see me, since I should have been in Hendersonville.

At noon, Chris the New York biker arrived, pulling up to the house at the same time as Lorre returned from walking Sunshine. Introductions were made all around, and then the two of us suited up and headed south.

I lost track of where exactly we were, but the rolling hills and picturesque fences and enormous trees were beautiful. The day was sunny and hot, and neither of us were thrilled to crest a hill and see a long line of cars sitting still.

We idled and sweated for a few minutes, until Chris said, "You want to go up the side?"

"Sure," I said, thinking he meant the yellow stripe. When he took off up the shoulder instead, I hesitated. I'd had one bad experience with misjudging the width of my hard bags when I dumped the Hornet in Colorado. I didn't want to do that while moving.

After a glance around and a suspicious stare over my shoulder at my luggage, I decided to try it. I crawled up the narrow strip of pavement to the right of the cars, reminding myself to breathe as I prayed not to contact anyone. A few cars disappeared behind me with no incident, and then the lane narrowed just a little more. Convinced I was out of room, I ditched onto someone's front lawn.

The turf was soft, and the bike squished to a stop like rollerskates on carpet. I had a momentary heart attack, and then remembered what Roy had said to me recently: "She rides like a big dirt bike." I rolled on the throttle, and Bee ate up the lawn like a champ.

A short time later we rejoined the flow of traffic, as a pickup truck had deliberately moved over to block Chris' path. When we reached the construction that was causing so much backup, we saw that they were carefully trimming the grass at the edge of the road. Clearly that was worth half a mile of stopped traffic.

The remainder of the ride was free of grass-trimming, but full of slow cars.

"I don't know what was up with all those drivers," Chris said as we dismounted at Puckett's in Leiper's Fork. 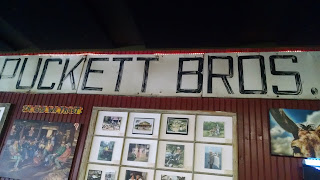 He told me about the artist who had fixed up the barn we were walking by and turned it into an art studio. Then we entered the restaurant and were greeted by the welcome aroma of slow-cooked pigs.

I ordered a plate of BBQ with greens and grits, and was told, "Grits? That's breakfast, honey." Way to look like a tourist. I got the cauliflower casserole instead.

The food was delicious, and the band playing at the front of the room had a fun, relaxed vibe. We talked music; Chris is in IT currently but would prefer to be in music with his guitar. He wondered at the band when they started doing some jazz improv, saying he didn't understand that particular skill in the context of jazz.

"I can't believe we met at a gas station two days ago," he said.

"Where else do you meet people who are traveling?" I asked. He agreed, noting that a couple friend of his had met in a gas station many years earlier and were now happily married.

"I went on a date with the most boring girl last night," he said, shaking his head. "I feel bad saying it, but... Sometimes I just wonder, What are you doing with your life?"

I had to agree that people who just work, watch TV, and sleep, and are completely content with that, are a mystery to me. I could do that for maybe a week before I lost my mind and did something drastic to compensate.

Back on the topic of music, he mentioned Kiss and then said we should go to the arcade so I could play the Kiss pinball.

"It's the new one," he specified. "Not the old one." I wouldn't have known the difference.

On our way out, we had a seat in some chairs on the back lawn to properly take in the view. It brought to mind stories of the Old South. 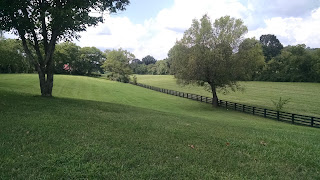 The ride from Puckett's to the arcade contained fewer annoying cars. By the time we pulled into the parking lot, big black storm clouds were crowding the sky and lightning was striking at the horizon. We brought our helmets inside and stowed them under a game.

The place felt like a cross between a gaming store and a casino. It was packed wall to wall with arcade games that I eventually realized were 90% pinball machines, and the narrow aisles were crowded with gamers. Songs and sound effects ricocheted off the walls from every direction, melding into a numbing, bleeping cacophony. 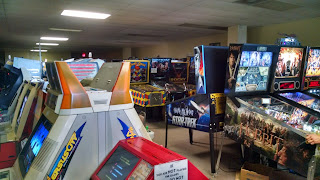 We took a few turns at the Kiss pinball, and he was winning by a large margin before I even realized there was strategy involved. Pinball had always seemed pretty random to me - just fire away and hope you hit something. But Chris explained that all the lights have meanings and all the different targets do different things depending on which lights are lit, and you in fact have a fair amount of control over where the ball goes.

"How do you know so much about it?" I asked.

"I used to play in tournaments," he said.

"There are pinball tournaments?" Of course there are. There are tournaments for everything. I'm quite certain I've never met a competitive pinballer before.

When we were done being hollered at by Paul Stanley, we tried several others. Each one is set up differently, but there are certain structural similarities to be found when you start looking for them. We played Fish Tails, Batman, The Twilight Zone, and The Addams Family.

When our time was up, we stepped outside to find that it had recently rained, but the sky was currently clear. The timing of our escape to the great indoors couldn't have been better. 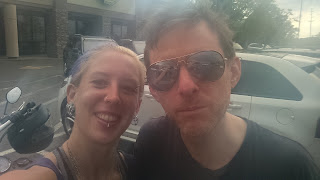 We said our goodbyes, as Chris was preparing for an early business trip the next morning, and headed north. When I returned to the house, Frank was at work, so I changed into normal-people clothing and took a walk. He lives in the 12 South district and had said something about it being full of hipsters. That statement couldn't have been more accurate.

I wandered into Jeni's ice cream and was overwhelmed by all the weird but amazing-sounding choices. I ended up with Buttermilk Biscuit with Peach Jam and Whiskey Pecan, planning to come back another day for the Goat Cheese with Cranberry.

The ice cream was just as good as it sounded, and I took a nice stroll up and down 12th to see what was there. Most of the restaurants were the sort of place that offered valet parking, so I didn't bother going in. I did find a cool statue of an...I'm not sure. Something esoteric enough to survive in Hipster South. 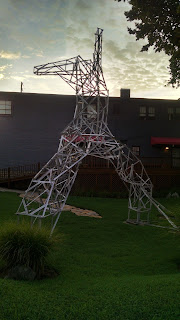 Since I didn't have a vehicle to valet (and would have smacked any valet who tried to touch Bee, anyway), I found myself back at the Monkey with a glass of wine and a small table to blog from. When I eventually returned home with an intent to go out on the town, I fell asleep on Frank's couch instead.
Posted by Skipper at 10:08