Inspection of the atlas had resulted in a loose plan to exit the Parkway and return to 81 at Roanoke, but when I popped out of Shenandoah at about the halfway point, time was tighter than I hoped it would be. I grabbed a sandwich and some phone recharging off of 64 and texted Frank. I wasn't sure if I'd be able to make Nashville that night, given the surprising amount of time the Parkway had taken. It had been absolutely worth it and I had no regrets, but I felt a little badly telling him I was thinking about camping another night and arriving in the morning. He told me to take the time needed to be safe on the road.

Sandwich gone, map viewed, caffeine consumed, and musical device recharged, I took 64 to 81 and parked myself in the left lane. Channeling my trip to Colorado with Cider, I flew along pretty contentedly for 120+ miles before stopping again.

I gassed up Bee, oiled her chain, put some more espresso into myself, and chatted briefly with a Harley rider who had left Boston that morning and was headed home to Asheville, TN. Then I roared off again for another chunk of miles. 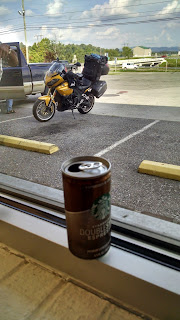 The next stop was just before sunset. I had some cheap chicken pieces and fries, and more coffee. I wasn't sleepy yet, but I didn't want to get there while out on the interstate, so it was preventative treatment.

"I love your hair," the gas station cashier told me. "You look like that joker girl."

"Harley," I supplied, grinning. "Thank you."

My hair is currently half platinum blonde and half purple/green/pink, so the colors aren't quite Quinn, but the pattern definitely is.

Feeling better about the day's mileage, I sent Frank a message to say I might actually make Nashville that night after all, and I'd update him again at the next stop. He confirmed that I could arrive whenever, and I launched myself toward Knoxville with a caffeinated vengeance.

As the sun went down and the atmosphere darkened, there was a moment when I pulled away from other traffic, and suddenly the road in front of me was alarmingly dark. I squinted and flipped on my high beam, then flipped it off again. Sure enough, the low beam wasn't working. No big deal; I had a spare I could swap in at the next stop. I left the high beam on and kept driving. 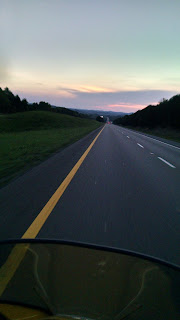 The air got strangely warm as I approached Knoxville, and I was glad I hadn't put my jacket back on yet. Usually sundown precipitates the cold shivers, but the temperature rose until I was actually sweating. When the Rascal Flatts claimed that everything gets hotter when the sun goes down, they must have been in Tennessee.

On the west side of Knoxville, I pulled into a truck stop. It took me a moment to realize it was actually just for trucks and not for anything smaller. I wandered through acres of TT parking, slipping between the trailers, trying to find my way back to the exit. Finally I reached the gas station next door that was built for us passenger vehicles and threw down my kickstand, wondering if any truckers were laughing at me.

I pulled out my tools and the spare bulb and got to work. The first three screws came out of the housing, but the fourth one was partially blocked by the fairing and my adorable folding compact screwdriver couldn't reach. I went inside and asked the cashier for a screwdriver. She led me outside to a car, opened the trunk, and dug through a toolbox. All I could see were the roller skates.

"You skate?" I asked excitedly, and she said yes. "Artistic or derby?"

"Artistic," she said, then made a vague gesture to indicate the owner of the car. "But he derbies."

She got out her phone and called the shop next door to ask if she could borrow a screwdriver. I told her I'd ask around the pumps, as there were people with campers and trailers and I didn't want to send her on a giant hunt. It took me about seven seconds to find a man willing to lend me a Philips.

I returned to Bee and removed the last casing screw, then released the bulb clip. Then I tried to pull out the bulb, but it wouldn't budge. I pulled and twisted and knocked on it, and still it stayed. I dug out the owner's manual and turned to the Headlight section, where it told me to remove the casing, release the clip, and "remove the bulb." Thanks; that was helpful.

It was about that time that a tall, thin man with a sleeve of tattoos poked his head over from the next pump to ask if everything was okay.

"Just replacing a headlight," I explained. He was going to go on his way, but I stopped him and explained the problem. "Any chance you can get this out?" I asked.

He joined me in the prodding of the bike. He was also a biker, originally from New York but recently relocated to Nashville. We puzzled over the bulb and the unhelpful manual together. I got out pliers and we both tried to use them, but still the stubborn bulb stayed put. Finally I suggested we try to pry it out with a knife, and he borrowed my knife and succeeded at the task.

The celebration was short-lived, however. The base came out, but the glass portion had broken off and dropped into the housing, and it wasn't in easy reach.

The man from whom I had borrowed the screwdriver walked over with his wife to check out our progress. I offered him the tool back, but he waved it away and told me to take my time. The biker said he had an idea and disappeared inside the store, then returned a few minutes later with a pair of straws, closely followed by a man with a coat hanger. New York proceeded to unwrap the straws and fold one of them into an L, then fish around in the headlight housing with it. He succeeded at contacting the broken chunk of glass but couldn't fish it out.

At some point Camper Man had retrieved a roll of electrical tape. He asked New York for a straw and wrapped the tape around it inside-out, creating a sticky side with which to fish for the glass. We each tried, but it didn't work. I tried the coat hanger too, but only succeeded in putting scratches in the lens.

While this game was being played, a truck driver and then a mechanic wandered over to offer their assistance. We explained the situation, and they watched for a few minutes, offered a couple of unsuccessful suggestions, and then went on their way. The couple with the camper also left, gifting me their screwdriver on their way out.

"I don't have anything else to do," he assured me. "I'm just driving to Nashville. I'm Chris, by the way." We shook hands and introduced ourselves properly, an hour and a half after actually meeting. We ended up deciding that the only option left was to disassemble the fairing, and I wasn't willing to begin that project at 10:30 at night. I told Frank I wouldn't be making it that night after all.

"What?" he said. "I feel like I should be buying you a coffee. You still have no headlight, and if I broke that glass, I'm gonna feel terrible."

"I probably broke it," I said. We went inside and got some colorful bottled sugary liquid and sat at a table. He said he had a story to tell me.

Another hour and a half later, it was midnight and we'd been swapping bike stories since we sat down. We both needed be on our way, but we exchanged phone numbers and made plans to go for a ride when I eventually made Nashville. I high-beamed it three miles down the road to a hotel, where I had a hot shower and spent the night in air-conditioned comfort.
Posted by Skipper at 22:37