I decided sometime earlier this summer, probably around the time I moved, that I wanted to spend as much of the season on the road as possible. Toward that end, I moved my schedule around a bit to free up a week and took off to see my friend Frank and my favorite city, Nashville.

My original plan was to do the long day (1,033 miles) on Wednesday, but by Monday I was too tired to want to attempt it, so I told Frank I'd be there on Thursday. I was aiming to leave at 8am on Wednesday.

I got up at 5:30 to pack, install the new risers on the bike, and install the new speakers in my new helmet. I know you're not supposed to farkle the bike and test new gear on a long trip, but I hadn't left myself another option.

At 8:45, I realized that the bundle of tent consisted only of stakes, poles, and a fly, and was distinctly lacking in the presence of an actual tent. After turning my house upside-down, looking for it in every possible location, I texted Abel and asked if he had it. He found it in the garage.

I finished packing and rolled out at 10:30. Unfortunately I was headed north to get the tent, rather than south into adventure. I picked it up, fitted it onto my luggage, spent a few minutes learning how to operate the audio amplifier, and was finally on the highway at 11:20. Definitely not as planned, but I figured I could still get in enough miles to make Thursday fairly comfortable. 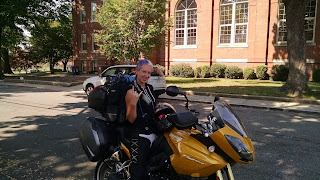 I headed down 91 for 15, missed my exit somehow, and hit traffic. A section of 95 was closed, with signs warning to seek an alternate route, and the traffic had backed up onto 91. I got off in New Haven, bought a battery to charge my electronics, realized it came without any charge at all, bought a USB AC hub, and stopped at Panera to eat lunch and use their power outlets. By this time I was started to get annoyed at my lack of progress. I know I'm capable of throwing down the miles, but I was doodling around and not doing it. I got back on 91 north and caught 15 to avoid the clusterfuck on 95.

There were a few slowdowns on 15, but nothing terrible. I took 287 through New York, waving at Jeff as we sailed by the exit where Bumblebee used to live. Well, perhaps "sailed" is an optimistic term; traffic was heavy and we weren't going with any great efficiency.

Route 287 led to 78 and then 81. I rode from Massachusetts to Connecticut, New York, New Jersey, Pennsylvania, and Virginia. In Strasbourg, I left the highway and found camp for the night at Elizabeth Furnace.

Signs in the campground warned of bears, so I took my bag of beef jerky, bag of oats, and an apple, put them in a plastic bag, and tied it up with paracord. Then I started throwing it into the trees.

It took me 7 or 8 throws and a broken apple to locate the bear bag in a spot that seemed okay. I closed the end of the paracord into one of the saddlebags to secure it and went to sleep. 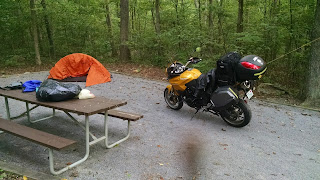