My Turn to Be Grumpy Cat

Rolling out of my campsite at 8:30 on Wednesday morning, I was disappointed that it wasn't earlier, but I had left my phone off to save battery and so had no alarm clock. It wasn't long before I found 81, and I pointed us north and rolled on it.

Of all the interstates I've ridden, 81 is my least favorite so far. It's two lanes wide and absolutely brimming with tractor trailers. They all go slowly, but some of them go a little more slowly, so the faster ones try to pass, but it takes minutes because the passer is only doing a mile an hour more than the passee. Over the course of the day, I probably spent hours waiting for trucks to pass other trucks while traffic backed up impatiently in both lanes. I tried to think up creative things to call them, but I was too tired. Camping with no inflatable pad meant I had slept terribly and my back was cramping before I ever got on the bike.

I didn't have enough electricity to use my GPS, but a little digging around in my head revealed that I actually remembered how to get home, so I didn't even need a map. I hoped my two backup batteries would provide enough juice to my phone and my amplifier to give me music all the way home.

Stop one was before leaving Unicoi for gas. Stop two was for gas, coffee, and jerky. Stop three was gas and more coffee. Stop four: gas, chicken bits, and coffee, and recharging my electronic devices. It seemed to take forever to get out of Virginia. 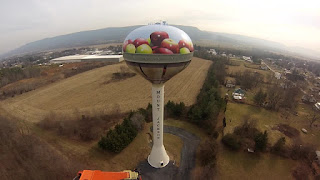 I was walking through a parking lot when somebody yelled, "What is that?" I looked around to see if they were talking to me, and found a face staring at me through a closed car window.

I wasn't clear whether it was the person doing the yelling; otherwise I would have yelled back, "It's a fucking motorcycle!" I was tired, in pain, and looking at riding until probably midnight. The steady diet of ibuprofen and tylenol wasn't doing its job on my knees or on my ears, which weren't happy with the placement of my helmet speakers. I discovered that I had a choice between wearing my sunglasses, which made my head hurt but relieved the pressure on my ears, or not wearing them, which relieved the headache but left my ears hurting.

If this was the experience that Cider had every time he rode cross country, I understood his Grumpy Cat demeanor - but I no longer understood why he would do the ride. If I thought every trip I took was going to be like this, I'd never leave home. I hated the traffic, I hated other people, I hated myself and my bike and my stupid helmet and the fact that I couldn't charge my phone.

Pulling into the next gas station, a pedestrian made a sudden turn in front of me and I almost dumped Bee trying not to run him over. He shook his head at me and I wanted to yell, "The game comes from behind you!" But I just drove away. Then I hit rain and got wet, put on the rain gear and got cooked in the sun, took it off and hit another downpour. I got something in my left eye and drove with only my right eye for a while because I couldn't pull over through the traffic. That cleared up and I immediately got something in my right eye. At least they weren't simultaneous. 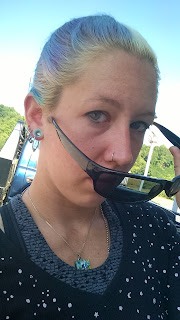 Finally over the New York border and back in familiar territory, I exited incorrectly for the Merritt Parkway and ended up lost in a town made of hills. I had 30 miles in the tank and couldn't find a gas station. After making frustrated circles for a while, literally talking aloud and telling myself not to lose my last thread of patience and start screaming, I found the parkway and then a rest stop. Outside in the dark, I pulled out my old contact lenses and replaced them with fresh ones. Unable to remember which script belonged in which eye, I got them backwards and everything appeared blurry and strange. I was too impatient to go inside to swap them so I used the dim parking lot and my rearview mirror. Achievement unlocked, and I could see again.

I had a granola bar and another doubleshot espresso; I was up to eight shots for the day, and it was only keeping me awake, not causing any excessive bouncing or shaking. I took some comfort in the fact that it was only 9:30, although it felt much later.

The last two hours were uneventful. The Parkway was busy but most of the traffic was moving nearly as fast as I was. I pulled into my driveway and put down my kickstand at 11:15 and started disassembling my luggage before even going into the house. I had the bike unpacked and all my things inside in five minutes flat. I unpacked only what was necessary to allow me to repack for work the next morning, showered, and was in bed shortly after midnight.
Posted by Skipper at 19:00