I was up unnecessarily early on Sunday morning, probably because I fell asleep at 10:30 on Saturday night. Coffee and a beautiful view from the back porch accompanied me while I caught up on blogging. 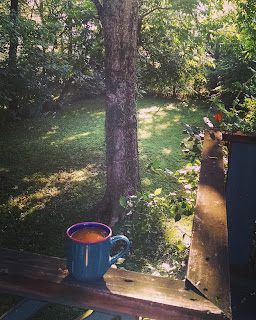 Frank works overnights, so I waited until a little before noon to wake him. Then we headed north - back to the same area where the Triumph dealer was located - got some barbeque for lunch, and headed for the Rivergate Skate Center.

The parking lot was alarmingly crowded, but the rink itself was tolerably occupied; many of the small children were running around the arcade area in sneakers rather than making cones of themselves on the floor. I had challenged Frank to a race, and he told me, "I hope you like the taste of dust."

We went over some stops first, as he's good at picking up speed but not so good at slowing down again. He took video of me doing a backward Drunken Sailor, and when I watched it later, I understood why he said it looked strange. 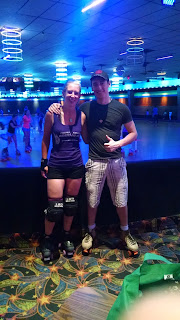 Oh, and he doesn't seem to mind the taste of dust. It's probably crunchy, but I wouldn't know.

After Frank left for work, Lorre offered me dinner. She was making zucchini spaghetti with meatballs and an Indian dish with custard-soaked bread, chicken, and raisins, called barbati (although when I Googled that word it showed me a dish with Chinese beans). She said it would be ready in an hour or two, so I decided I had time to put my skates back on and make a coffee run.

I ended up at a Walgreen's, and as I was rolling out with my groceries, a man in a business suit getting into a fancy car pointed at me and said, "You keep being you!" I waved and skated away.

On the corner where the parking lot met the street, a man was sitting on a rolling cooler parked in the grass. He waved and said something, and I stopped. I ended up standing there for half an hour while Klayton regaled me with stories. I learned that he had been drinking and was not ashamed to admit it, that he was 61 and that was very old, that he had built his own cabin 17 years earlier and had lived there ever since, that his mother had known him better than her other two children because he didn't lie to her about his vices, that he was on his third application for disability and he was going to get it this time, that people will respect you if you're not too proud to beg, and that he had always wanted to meet a roller derby queen.

I arrived back at the house dripping with sweat. Lorre asked me if I had found the grocery store successfully, and I told her about Klayton.

"You make friends wherever you go, don't you?" she said, smiling.

"I never would have guessed," she said.

The three of us ate in the living room, discussing the pitfalls of self-publishing and the current state of Nashville. The barbati was amazing and Lorre said she would share the recipe. 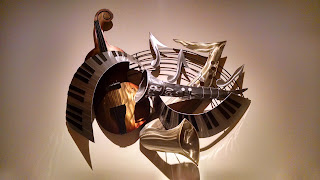 After dinner I put on my slightly-nicer-than-sweaty-biker clothes and headed downtown. I parked in the library's garage and meandered down Broadway, looking for a place with some high energy. It was Sunday, though, and most of the bars seemed sleepy. I found myself at the Wild Beaver because someone was doing an excellent karaoke of Rage Against the Machine.

I hadn't come downtown to see karaoke, though, and I was about to leave when a guy offered me a drink. I shrugged and said sure and tried to make conversation. His buddy was up on stage butchering Eminem, and I immediately regretted accepting the drink. Three minutes later he said they were leaving and asked if I was coming.

"Where to?" I asked. I didn't really want to hang out with him, but I definitely didn't want to stay at the Beaver.

"Skellys," he said. I had no idea what that was.

"I can't bring this outside," I said, holding up the drink. "Give me a minute."

"I'll bring it," he said, and grabbed the cup and walked out the door.

"Hey hey," said the door man, stepping in front of him. "You have to finish that inside." I tried to snark quietly as I took my drink back. 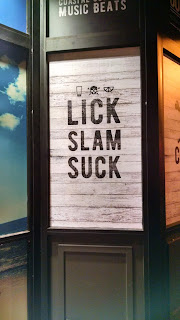 The man's friend led the way, and the three of us walked up the street and around a couple of corners and up another street. When he made to enter a parking garage, I stepped back and let the two of them go ahead of me. Through the garage and down a set of stairs was Ms. Kelly's, another karaoke bar with an even smaller crowd: two people on stage, a bartender, and a customer at the bar.

My companions stopped briefly to speak with the DJ, then walked toward the bar. Neither of them looked back to see if I was coming along, and after a moment's hesitation, I turned on my heel and walked out the door. I was certain I could find more interesting company without much effort.

Dodging quickly back down the street and around a couple of corners, I kept an eye out behind me until I reached Broadway again. Neither of them seemed like they had enough energy to actually chase me, but it pays to be paranoid. 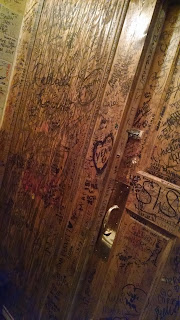 Back at the Tequila Cowboy, because sometimes an old favorite is in order, I got a drink and a seat and enjoyed a band that was covering AC/DC and some other good rock. The singer had a lot of energy, and I felt bad for him that the Sunday-night crowd was about five people strong. There was one guy in his early twenties on the dance floor, wearing a dark green polo shirt and repeatedly trying to convince other bar-goers to join him. His friend wandered on and off the floor with slightly less enthusiasm. Eventually green shirt got around to me, and I joined him for a couple of dances.

His name was Max, and he was from Germany and "here to party." Max was indeed a one-man party, clearly disappointed that the companions he collected from the bar and the tables kept returning to their chairs, but full of determination to keep trying again and again. His suavity lacked something but he got an A+ for effort.

Around 11 Frank texted me to say he had gotten out of work early. The Cowboy was closing but a short walk found the Tin Roof still rocking, so I told him to meet me there. I chatted for a while with a flaming ginger in a Hawaiian shirt who was celebrating his 21st birthday and really wanted to be a park ranger, then went off to the bathroom and was accosted by a short, curvy, brunette girl named Aastha who wanted to show me around her country. She grabbed my phone, sent herself a Facebook message, and promised to show me everything awesome in Nepal if I was ever there. 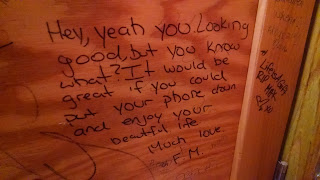 Frank showed up and brought me upstairs, where there was shuffleboard; apparently it's quite popular in Nashville. The board was crappy compared to the one at Clyde's but we still enjoyed our rematch. Suddenly we realized the bar had closed beneath us. We headed down the stairs to find they had blocked them off with trash cans, clearly unaware that we were still in the building. Out in the street, it was dark and quiet, at least for a city, and there was nothing left to do but go home. Broadway was rolled up for the night.
Posted by Skipper at 12:03