I got up with the alarm clock on Monday morning and got ready for one last day. Cider stayed in bed and hit snooze so many times I almost hit his phone against the wall. I'd done enough electronic damage in the preceding ten days to last a couple of years, though, so I settled for turning on the overhead light. He made angry noises and covered his face.

"There's no need to be a dick about it," he groused.

"So get up," I said. I turned the light off again (my nod to non-dickishness) and went down to the kitchen, where I dug around in the cabinets until I found cups for the brewer.

"I see you found the coffee," Carl said, appearing behind me as I added milk to my cup.

"I can always find coffee," I said.

I rolled my eyes. "I don't know," I said, gesturing vaguely upstairs. "I think he went back to sleep."

"Oh good." My opportunity to further ruin Grumpy's morning by jumping on the bed had disappeared, probably for everyone's good.

Alisia brought Vivi out to the bikes with us so we could update last year's photo of her on my bike. 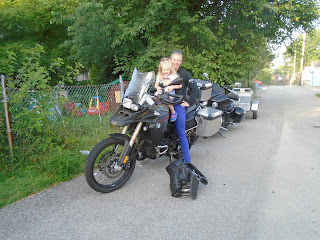 Traffic was quiet, since we were opposing the natural direction of rush hour, and we headed into the rising sun and beautiful weather.

"Trying to cut out a gas stop today?" I asked at our first break, which was nearly 140 miles from Carl's.

"I'm not thinking," Cider said. "I'm just driving." He looked exhausted, and I couldn't disagree. We parked the bikes by a curb at the edge of the Sheetz and lay down on the sidewalk, he on his back and me on my stomach. I think we were both trying to pretend that we had some other choice than to get back on the bikes and do another 400 miles.

After a few minutes I got up and bought some french fries and espresso. While I was eating, some guys who had parked an electric truck behind us came over to chat.

"You don't build power line, do you?" one of them asked Cider.

"No way!" the guy said. "I could tell by your boots." We chatted with them for a few minutes, but eventually could no longer deny the fact that it was time to leave. I stored my extra can of espresso in my bag and off we went.

The music player in my brain was on as it usually is, but with no external iPod to change tracks for me, it got stuck. I listened to Like I Roll by Black Stone Cherry for that entire day, and I don't think I'll ever associate that song with anything but driving through Pennsylvania. It's quite appropriate, really; it talks about rolling through the hills under the sun, which is exactly what I was doing.

I was snacking on jerky at our next stop when a pickup truck pulled in and parked awkwardly at the curb by the store.

"The hell kind of parking is that?" Cider wanted to know.

"And he's shirtless," I said. Anything can seem relevant to anything else when you're tired enough. The driver got out and headed for the air pump, which at least explained the odd location of his vehicle.

"Not really the kind of shirtless I look for in a dude, though," I said. "Or, you know, something."

"Not the kind of dude you look for in a shirtless?" Cider offered.

At that moment another Vaquero pulled in, also towing a trailer, ridden by an older couple. They parked behind us and Cider approached the guy to inquire about his trailer hitch. I tried to remember if I'd seen him approach anyone for conversation at any other stop. We ended up chatting with them for a while. The woman used to ride, but was having an issue with her hands that had forced her to passenger instead.

At the far edge of Pennsylvania we took a break at a welcome center. They had nothing that I considered food, just a vending machine full of cookies, so I pulled out the summer sausage I'd brought from home and sliced it up with my pocket knife.

I was chilling on the sidewalk, munching on my emergency sausage and admiring the trees, when a woman pulled in on a motorcycle and parked some twenty feet away. She was loaded down with gear and clearly on a long trip. I waited for her to get off the bike, but she appeared to have stopped only to manage her GPS and not to take a rest. Eventually I wandered over.

"Um, outside of Springfield?"

She was riding an old police bike, on her way to Virginia to visit her son and to look for a job. I told her to look me up on Facebook so we could do some riding when she returned, and she pulled out her phone.

"Roller derby?" she asked, clearly having found my profile. "That's so funny...I was skating with derby until I hurt myself last fall."

It was my turn for the "What!"

Before we parted ways, I invited her to our fresh meat night, since she was healing from her injury and looking to skate again.

"She's from Westside," I told Cider when I returned to the bikes.

"What?" he said, raising an eyebrow.

"And she does derby."

"Leave it to me to recruit for us in freaking Pennsylvania."

Our second-to-last stop was somewhere south of the Taconic Parkway in New York. Cider said something about waving to me from the highway.

We sailed up the Taconic, a beautiful four-lane piece of road where the halves are separated by trees, and the rest of the world is drowned out by more trees. It's reminiscent of the Trace but more interesting, since there are hills and curves. I found myself trying to enjoy it extra, knowing it was the last run of the trip. Some part of me hoped that if I focused hard enough I could make it last forever. 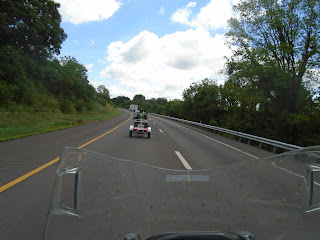 At a point in the road that felt oddly random, we turned off and dove into a small town. A lovely twisty back road lined with trees and pretty houses took us approximately north. Since Cider had told me the secret of the bikes - that the Hornet, as I'd started calling her, could easily take any curve that the Vaquero could make it through - I challenged myself to keep up with him, and I managed.

Just before the Mass border, we stopped one last time. I bought an ice cream sandwich, as much to lengthen the stop as to enjoy the treat.

"I can almost see it," Cider said, gesturing at Massachusetts. "So close..."

"Too close," I said sadly. "What are you going to do when you get home?"

Finally I couldn't drag it out any longer. I wrapped my arms around him.

We took 90 together as far as 91, where he went north and I went south. I passed him on the ramp, waved inappropriately, and took off. After a short, hot battle with the usual traffic, I was back in my driveway. Sass was just leaving.

"I unlocked your door," she said as we hugged. I'd had Cider message her to do just that, since my keys were theoretically locked in the house.

While unpacking that night, I found my keys - exactly where I had expected them to be. Exactly where I had in fact searched for them before we ever left my driveway. They'd been with me the whole time, all 4,412 miles of the trip.
Posted by Skipper at 16:59