I dragged myself out of bed at 6:30 on Friday morning, feeling like I had to hit the road as soon as possible even though I'd only gotten about four hours of sleep. The hotel had a pretty decent breakfast, and I forced down some eggs, sausage, and a biscuit beside the obligatory coffee. The morning was warm, and I left my jacket off; but shortly after reconnecting with 40, the world became shrouded in mist and got remarkably chilly.

I stopped to buy a replacement audio cable, as mine had had some mysterious involvement with the bike chain and now only allowed sound to one ear. (I don't know how it happened, but when I was leaving camp on Thursday morning, I found the end of the cable hanging over the chain, covered in dirty grease and slightly chewed up.) It actually took me three stops in fairly short succession; the place I got gas didn't carry audio cables, and after I found the cable I forgot to put my jacket on and had to stop a third time for that. But it was still reasonably early, and it got earlier when I crossed the time zone west of Knoxville.

I was at the house before 10am. I parked and impatiently ripped off my jacket, which had been set to Steam starting maybe 40 miles from Nashville. Frank came outside and gave me a big hug, then led the way into his basement apartment. While he shuffled some things around, I told him the story of the broken headlight.

"I'm thinking pancakes," he said when we both agreed we were hungry, so we got on the bikes and rode downtown. But the pancake place was apparently famous and had a line going down the street. We took a short walk looking for alternatives, but that section of town seemed to have only one restaurant.

We walked back to the bikes, pausing on the way to inspect a large pool of something beige that had leaked out of a dumpster. At first I thought it was expanding foam, until I poked it with my boot and realized it was pizza dough, cooking on the hot blacktop and forming a crust.

"The hell?" I wondered, but Frank was laughing.

"They're gonna be pissed," he said. "We threw a garbage can full of extra dough in there last night. I had no idea it would do this." I'd momentarily forgotten we were parked at his workplace.

We ended up taking the bikes to the Frothy Monkey, the same place I'd had breakfast last year before leaving town, although it was a different location. Their food is just as good as I remembered. I left my boots and riding pants under my chair when we got seats outside, and we caught up on life over breakfast burritos with salsa.

When the sun came over the building across the street and forced us into hiding, we went back home and I pulled out my Tennessee map and started planning out a scenic ride. Frank hasn't done the Trace yet, so we'll probably start with a few miles of that and then circle back into town some other way.

Eventually we went wandering into central downtown, the tourist district on Broadway. We found designated bike parking on 2nd, something I wish we had at home. 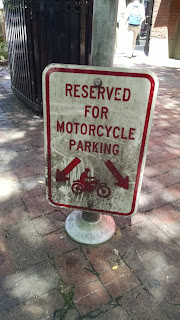 "Do you realize you don't have a license plate?" I asked. I was expecting him to say something like, Yeah, I forgot to register it and the cops don't seem to care. I've been hanging out with a few too many rulebreakers, I guess.

"Shit, what?" he said instead, looking with concern at the tail of his V-Star. "Oh man. It's been loose for a while and I kept putting it back on. When did you notice?"

"Just now. But it was probably gone before I got here, because I would have noticed if it fell off in front of me."

We wandered into the Harley store - funny how the bike parking happened to be right there - and then onto Broadway. We bounced through all the boot shops to visit his friends who still worked there and enjoy their air conditioning, then went into the Stage for a drink. Of course there was a band playing, because there's no dead air in Music City.

Frank referred to them as a day band, and I inquired about the difference between day bands and night bands, as the musical quality seems the same. Basically the day bands don't get the night slots because they're not as good at revving up a crowd. I could see the lack of stage presence in the current example, as everyone but the drummer looked rather bored and never smiled.

Our next stop was the Tequila Cowboy, which had been my favorite venue the previous year. We sat at the bar and had drinks and fries. 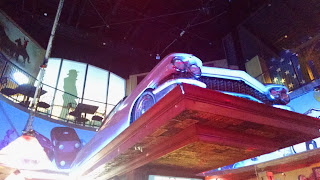 "There's a car up there!" Frank said suddenly, looking over the bar. "I never noticed that."

I raised an eyebrow. "It's been here at least a year," I said. "I can show you a picture if you don't believe me."

The band onstage was more interesting than the last one. The lead singer was a bit of a conundrum; he was a small guy, maybe 5'2", with ear piercings that made him look more punk rock than country...but he was belting out Alan Jackson and Eric Church in a huge voice that sounded too big for his body. 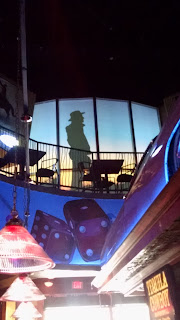 My sense of time had been out of kilter for most of the day. Between getting up early and crossing a time zone, it felt hours later to me than it really was, and I was pleasantly surprised every time I looked at the clock. Eventually the time did pass, though, and Frank headed off to get a new license plate while I went north to the nearest Triumph dealer for some assistance with Bee's headlight.

The highways around Nashville are a maze, constantly splitting off into other highways. Just to stay on one route you may have to take three or four forks in the course of a few miles, and the traffic is often very heavy. I was glad to have my GPS plugged into my helmet and talking in my ear as I dodged around cars and trucks.

The shop confirmed that the fairing would have to be removed and told me to come back at 8:30 the next morning. They would be starting walk-ins at 9, and he said it might take a while but getting there early should get me into the top ten.

Back in town, I came home and found Frank's housemate Lorre in the kitchen making dinner and her husband Ross in the living room. Lorre offered me food and then offered again, explaining that she's Jewish and has a natural compulsion to feed people. I declined the food but stayed for the conversation.

We must have spent a couple of hours just talking; it was long enough that we eventually ordered and ate pizza. Ross is a songwriter, currently trying to get his first novel published while writing his second one, and Lorre is an activist for disabled people. She reminds me a bit of my dance teacher Jayne, whom I visited in Boulder. They also have a dog, a Golden Doodle named Sunshine who just might be the chillest pup I've ever met.

Frank came home from work while we were eating, and when dinner was done we went out to a bar called Beyond the Edge to meet up with his friend Maxcy. He asked for a rundown on the rules of derby, and once I explained the object of the game, he started asking remarkably advanced questions about strategy. Before I knew it, the coach in me was dragging him around the room, shoving him back and forth while I explained blocker formations.

Maxcy never showed up, having fallen asleep while getting ready to go out. Frank took me to Clyde's on Church, a giant bar with ping pong tables, shuffleboard, and oversized connect four. I was in love. Why isn't there a bar at home with awesome activities like that?

I won at shuffleboard and connect four, then asked if he played ping pong.

"I'll kick your ass," he said, and we were off. He did indeed, approximately doubling my score for the first game. Then we volleyed for a while without keeping score. We had chased the ball all over the room and bounced it off the walls and light fixtures innumerable times when he took a beer break, somehow succeeding at drinking from a glass while bouncing the ball on the paddle with the other hand.

"Impressive," I said. I don't remember whose idea it was that I try, but try I did. Apparently I lack beer-and-paddle coordination. I got maybe one bounce before snorting my beer all over my face, my chest, and the floor. The ball rolled away unnoticed while I melted down in hysterical laughter, tears running down my face and beer down my arms. I couldn't breathe or even stand up straight. Frank wished he had taken video.

The night ended with a drive up a hill that overlooks the city. The view was amazing, and not much climbing was even required. I enjoyed the view and then, me being me, went and inspected the radio towers. 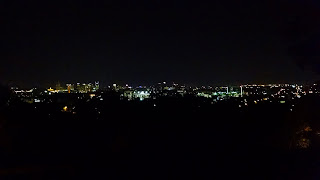 On the way back to the car, I was balancing on a ledge with a slightly angled top. Feeling pretty secure, when a small gap appeared in the ledge, I jumped it. Unfortunately it had rained recently and the ledge was wet; my boot slipped and I landed entirely on my left shin. I bounced up and limped away, following the age-old advice to walk it off. Nothing was broken, but I'm not sure I've ever taken a shin shot more painful.
Posted by Skipper at 11:29