Thursday dawned with no sign of bears, or any other wildlife except for a small cat who ran like hell when I tried to say hi. I skipped coffee and breakfast because I didn't want to spend time building a fire. I just packed up my things and headed out.

My atlas showed the Blue Ridge Parkway nearby. I could have gotten back on I81, but with the parkway paralleling it through Virginia, that seemed like a waste of an opportunity. At the entrance to Shenandoah National Park, the ranger told me it was the 100th birthday of the National Park Service and entrance was free; that was a pleasant surprise. I thanked her and rode on through. 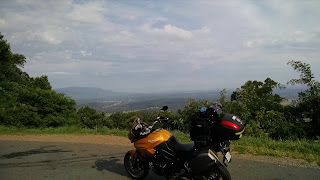 At the visitors' center I parked near a group of motorcycles, one of which was a Triumph. Inside the museum I found the riders, and chatted them up briefly before they moved on. They were also headed for Nashville and assured me they'd see me on the road. After they left, I wandered through the museum and gift shop, then down the lawn to the viewing area. A slightly hazy valley vista greeted me, miles and miles of fuzzy green trees looking like a northern wonderland.

Eventually I returned to Bee, and as I was situating my things to return to the road, a pair of bikers pulled in beside me, one of them on an F800GSA. 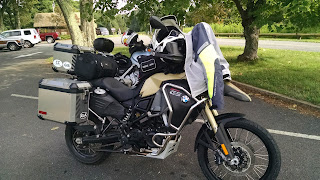 "I love your bike!" I said before he had even killed the engine. He removed his helmet, smiled, and thanked me. A woman dismounted from an R1100RT beside him and came to join us. Nerdy bike talk ensued for quite a while as we discussed the various features and farkles of our rides and compared notes on the Parkway.

Back on the road a few minutes later, it didn't take me long to decide that the Blue Ridge is one of my favorite roads. It has the deserted peacefulness of the Natchez Trace, a jacket of deep dark northern woods, and the hilly twisty terrain that makes a great motorcycle road with a blessed lack of decreasing-radius turns. I flew along, working the corners and enjoying the scenery in the straights. Every few minutes I encountered a slow car, passed, and continued on my way. 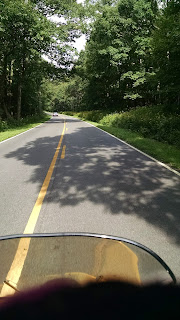 After a while my desire for coffee made itself important by way of a headache, and I stopped at Skyland and got a latte and a lemon-lavender muffin (a great idea, unfortunately poorly executed). On a patio beside the building, a man was playing the hammer dulcimer and talking to a small crowd about folk music between songs. I sat on a wall and devoured my brunch while listening to him play. I never would have thought that the phrases "rock out" and "hammer dulcimer" belonged in the same building, but this gentleman proved me wrong. He played with a passion that gave me a new interest in a style of music I've been ignoring for many years.

He finished his set by playing Amazing Grace on the flute, and I finished my coffee and took my leave. As I was saddling up, one of the bikers I had met in the group earlier pulled in and said hello. He was riding a Goldwing trike, his lady passengering, and he had a paunchy belly and a sagging lower lip.

"Rick was forlorn that he didn't get to chat more with you," he said.

"Well he's a young single man and, you know the story." He shook his head a little bit and I swear the two hairs he had left muttered something about whippersnappers. "They want to ride so fast," he continued, "And I said, I'm not going to enjoy my ride trying to keep up with you. So I'll just see you at the end."

I nodded and wished him a good ride, thinking I was definitely in the category of riders who would ruin his fun. A few minutes down the road, I found a car moving slowly because it was being held up by three bikers moving slowly. It was the old man's friends.

I debated passing the car, but didn't want to get stuck trying to pass the riders, so I slowed my roll for a while and hoped they would pull off. The third rider wasn't quite keeping up with the first two, and I passed him and the car when the road opened into two lanes.

The opportunity was brief, though, and the lanes merged again a few hundred feet along, leaving me in the middle of someone else's pack.

The second rider spotted my predicament and motioned me forward in the next passing zone. I went around him and then got stuck again as a car came the other way. I did several miles sandwiched between riders 1 and 2 while rider 2 tailgated me obnoxiously. I wasn't sure if he was annoyed with my location and desire for speed or if he just felt that was a generally appropriate following distance. Finally I saw my opportunity, and I opened the throttle and roared past rider 1. I waved, then lost sight of the group around the next curve and never saw them again.
Posted by Skipper at 21:14