I was up early again on Monday morning, blogging, making coffee, and planning our bike route for the day. Frank had never ridden the Trace despite living for more than a year in Nashville, and I intended to fix that.

"I'm not used to actually seeing the morning," he had said. "Normally I'll sleep until the middle of the afternoon and then go back to work."

I coaxed him out of bed with a sandwich, then entered the Loveless Cafe in my GPS. Attempting to get directions to "Natchez Trace, Nashville, TN" had tried to lead me to Natchez, MS, but the Loveless is conveniently next to the north end of the Trace. 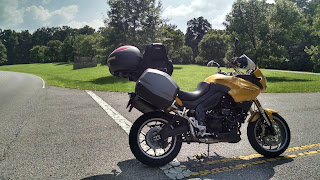 Most of my memory of the Trace was of fairly straight, open roadway, with gentle sweepers here and there. I'd forgotten somehow about the north end; the first five or ten miles are much tighter turns, more reminiscent of the Blue Ridge, and I had some fun ripping out a few corners. After half an hour or so, I pulled over.

"Want to switch bikes?" I asked. Frank had only ever ridden his V-Star and was curious about the concept of the sport-touring bike. I was happy to prosthelytize, after a warning to go lightly on the throttle. I surprised myself a couple of weeks ago by wheelie-ing out of a stop light, fortunately with no disastrous results.

I threw a leg over the V-Star while he climbed up on Bee. The Yamaha felt a bit like Hades, although lower and with a more forward leg position. She roared convincingly but Frank quickly left us a quarter mile in his dust, even while I opened the throttle to try to keep up. I also struggled through the first couple of turns, unable to put any weight into my feet to nail the bike to the ground. I'm quickly forgetting why anybody rides cruisers at all.

When it was time to turn around, we swapped back.

"What do you think?" I asked. "You converted to sport touring yet?"

"I'm definitely converted to a bigger engine," Frank said as he got back on the 650. He gestured toward the parkway. "You go ahead. You can do better on the speed. And the turns."

I grinned and took off. I kept it to a dull roar until those magic north-end twisty miles, and then I started pushing, focusing on my body angle and weight transfer to corner as hard as I felt comfortable.

"Man, you just disappeared when we hit those curves," Frank said, back at home. "That thing is amazing." I think my conversion tactics were successful.

I changed into my practice clothes and returned to find him playing guitar. He played Dead or Alive and I sang, and then he wandered through a few other songs while I put together the things I needed to skate. Then he was off to work, and I was off to Clarksville to practice with the Red River Sirens. 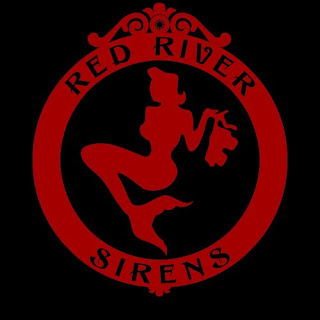 The skating rink was dark and cool, a welcome relief from the sweltering outdoors. I introduced myself to the first skater I saw, who was surprised but excited to see me. I think there were about fourteen of us all told, including the two coaches. Their most experienced skater has about six years, but the majority of them are pretty new to skating and derby. A lot of the drills and concepts they worked on were similar to ours, and Krazy Kouch actually reminded me a bit of Mars, although Mars wouldn't have put up with that much talking on the side.

After a couple of hours getting thoroughly sweaty, we went out to a nearby bar for a post-practice beer. Smoking is allowed indoors in Tennessee; I hadn't realized the no-smoking-in-bars law wasn't nationwide until this trip. I enjoyed hanging out and talking with the coaches and skaters, but when I left, I was dismayed to find that the inside of my helmet smelled obnoxiously like cigarettes.
Posted by Skipper at 14:41