Norm greeted us with hugs, and we talked about the ride while peeling off layer after layer of sopping wet gear. We hung jackets and pants from the bikes and made a pile of things to put in the dryer. Then I escaped to the shower to finally get warm.

When I returned to the living room, we took our mound of wet things and separated them into "normal clothes" and "things that might not like being in a dryer." The latter group included gloves and rain suits, and they went in on Super Delicate. Then Norm poured us drinks, and we sat down and started catching up.

Norm had bought a new truck and a fifth-wheel camper, having sold his house to do some traveling. The camper hadn't been retrieved yet, but we went in the other garage and drooled over the shiny new truck, a Chevy doolie that barely fit in the space. He described all the features and told us about a friend of his who makes his living delivering new campers to customers. Cider was suddenly animated and full of questions, wanting to know if there might be another job opening in that field. Norm promised to get him some info.

When the dryer beeped, I went to check on the gear. The first thing I found was a small wrist band.

"What happened?" Cider asked from the kitchen, sounding concerned. "Did we melt the gear?"

"Nope," I answered, walking out of the laundry and hanging my head. "But your iPod is very dry now."

It had been in pocket of my rain jacket and I'd completely forgotten. It didn't come to life.

I'd love to post a picture of the three of us, but nobody thought to take one. Norm did get one of me and Cider, captioning us the newest guests at Norm's B and B. 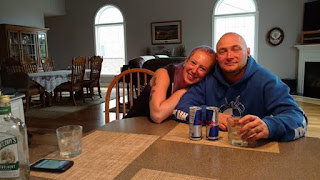 The rain suits fortunately survived, unlike the iPod. After throwing in the other clothes, we left the house (in the new truck, of course) and went to visit Judy, Norm's wife. I'd missed meeting her last year by arriving too late, and I was glad to make up for that. The four of us chatted about road travel and the truck and the quality of the sandwiches her staff was serving.

After a few minutes we headed for dinner. Norm took us to The Speakeasy in Sacramento, a ghost town that seems to have nothing living in it outside the restaurant. On the way in, four people were making their way out, and every one of them greeted us politely. Norm greeted them all in return, and Cider and I exchanged a look.

"We're not in New England anymore," I said, and he just shook his head.

In the restaurant, I made up for another lost opportunity by getting prime rib; what else can you eat while in Nebraska but beef? It was wonderful, as were the company and the conversation (and the finally being warm). Sixteen hundred miles in 36 hours made the relaxation feel so good.

We stopped for booze and then went back to the house. The night ended after only one drink, though, as we were falling asleep in our chairs. A full night's sleep was calling, and I couldn't help but answer.
Posted by Skipper at 09:52