The Manitou Springs Cliff Dwellings were first on Tuesday morning's agenda. A short caravan of cars and bikes brought us out route 24 to the site. We wandered around and climbed through the dwellings and hid from the heat in the museum. I realized when I pulled out my camera for the first time that week that it was wet. It seemed the rain had leaked into my luggage after all. Most of the photos I took were a little blurry, but once it had time to dry out, it returned to normal. 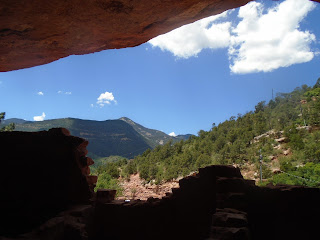 On the road east, traffic slowed to a crawl, and the two of us on the bikes found ourselves alternately walking and rolling through the crush of cars and the heat. In a few minutes we came upon an accident scene where a cruiser had shrunk the road to one lane. As we picked up speed and rolled through the area, we could clearly see a body lying in the middle of the right lane, an arm and a foot sticking out from underneath a green plaid jacket that had been thrown over the face and chest. One foot was sneakered, and the other sneaker was lying some fifteen feet away on the pavement. A tanker truck was stopped at an angle at the front of the scene.

Kimmy and I looked at each other and shook our heads. My first guess was suicide by truck, and the news confirmed later that that was the case. Around the fire that night, we commiserated about the poor trucker who had been forced to take someone else's life and will forever have to live with that image. Our little group had been fortunate enough to miss the incident by minutes.

From there we went to Garden of the Gods. The parking lot was full, and so were the next one and the next one. Cider and I wandered through the roads and parking lots at a snail's pace, the kind of speed that bikes don't really go because they'd rather fall over. We finally found a space to share after exploring several lots, and we parked and spent a moment flexing our left hands to relieve the strain from so much clutch use. We dismounted, and that was when Kimmy discovered that her camera had also found water while tucked away in the saddle bag.

The two of them took off to the store to get rice, and I went my own way and found a bike shop. I'd busted through my riding gloves somewhere between Massachusetts and Nebraska, and I wanted a set of highway pegs to relieve the pain in my knees. I also wanted a partial helmet, since wandering through town in a full-face was awfully warm, and a cell phone mount so I could use my GPS. 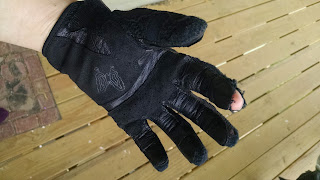 The gloves and the phone mount were an easy find. The pegs turned out to be a millimeter too large for the engine guards on which I wanted to mount them, and when I told the salesman what I wanted in a helmet, he proceeded to talk me right out of it. Apparently studies done with temperature probes have proven that full-face helmets are actually cooler than half or shell helmets. The rider also avoids sunburn and stays better hydrated. He also told me that every crash he's ever been in has resulted in a landing on the chin, because of the human tendency to look at what we're going to hit.

From there I went to a department store to pick up a charging battery for my electronics, and then to a pet store to have my dog tag remade. I don't like being on the road without it. Then I had to go to a craft store for a chain to hang it on, and finally I wandered through several other department and hardware stores looking for breathing fuel. The particular kind I needed was strangely elusive, but eventually I turned it up at an Ace and headed home.

The driveway at the house is narrow and sloped, with a water bar at the street and a gravel patch next to it where we parked the bikes. I approached it cautiously, taking a wide turn and then stopping and backing to get myself properly lined up. All the cars were home, leaving me only just enough space to maneuver. I lined up the bike, checked the ground around me, and started slipping the clutch at walking speed toward the gravel patch. Things looked good and I was confident we were going to make it, when suddenly the left saddle bag bounced off the taillight of the rear car, and the bike leaned right. I couldn't save it, so I dove off into the gravel on my hands and knees. There was a lovely crunch as the side of the bike touched down.

I hit the kill switch, ripped off my helmet, and said a few nasty things. Then I went to the front door, where Danielle appeared.

"Can I have some help?" I asked. "I dropped the bike again."

She looked at it and made a face. "We're going to need some boys for this," she said. "That's a bad angle." The top of the bike was facing down the hill and the wheels were in the air.

I turned off the ignition while Danielle got Cider. The three of us managed to upright her without too much trouble, and I apologized again for dropping the bike again.

"It's an adventure bike," Cider said, patting me on the back. "It's meant to be dropped. Don't worry about it. Now come have a drink." I got myself sorted out and changed into shorts, then joined the clan in the back yard with a plate of pulled pork and cheesecake and a glass of wine. I sat next to Kimmy, and we talked derby and coaching until the sky got dark.

"I think it's time to light this fire," someone said.

"Let me go get some toys," I replied, and went inside. I found an empty rum bottle to hold my fuel and removed the label so no one would think it was good with orange juice. I gave Kimmy a quick explanation of what to do if things went terribly wrong, then returned to the ring of chairs around the unlit fire.

I arranged my towels, tested the wind, checked the distance of the chairs, and added a touch of fuel to the fire pit. Using a long-stemmed lighter, since there was no way I could make a decent torch, I took a knee and let my inner dragon out. 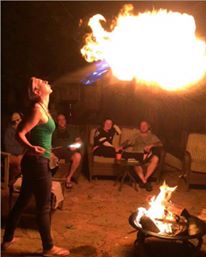 The noise of the explosion panicked the dogs, who scrambled and barked and ran in circles. The fire lit instantly, and I did a few more breaths for show before shutting it down for the evening so I could shower off the fuel and get into the rum.
Posted by Skipper at 16:47