Friday morning, Cider took Kimmy to the airport; her work schedule demanded that she leave a little early. Alan, Julie, and Dave were off to see the Royal Gorge, so I jumped in their car too and we headed south.

Route 115 took us along the edge of Fort Carson, where the installed military seemed to be running maneuvers. An Apache helicopter was circling the area, and Dave spotted a tank hiding beside a small hill. I didn't see it; I guess it was well-hidden.

On route 50 we turned west and shortly entered Cañon City. As we drove toward the parking lot for the Gorge, Dave mentioned that he had been here before, but not since the seventies. In 2013, a fire had destroyed most of the infrastructure at the Gorge, and they had rebuilt the bridge and visitors' center. Some of the boards from the old bridge survived, and they used them as siding on the new building. 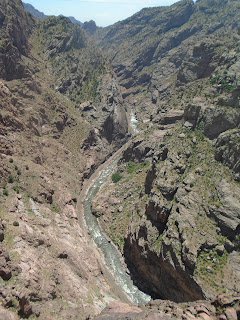 Dave asked me if I wanted to do the zip line with him, and I said hell no.

"Wait, let me get this straight," he said. "Wrecker - is not going to go on the zip line?" 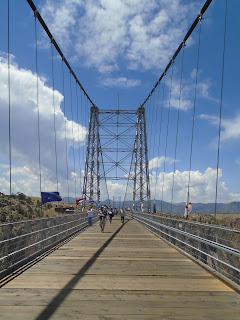 Alan was willing, though. The four of us set off across the bridge, admiring the slightly terrifying view and taking pictures. I accosted a random tourist to take a photo of us, and we in turn were accosted by another tourist, who politely offered to photobomb us. Julie said that was a great idea, on the grounds that he was adorable. Here we are with Spence, who promptly disappeared after the picture was taken, never to be seen again. 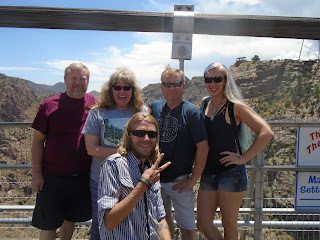 When we reached the end, the two guys took off to the zip line and Julie and I sat down to watch a band performing near the bridge. They were an Irish Gaelic rock band called Potcheen (apparently a type of whiskey) and they were amazing; I've got a video that I'll post in a future entry. I could have stayed all day, tapping my toes and singing. 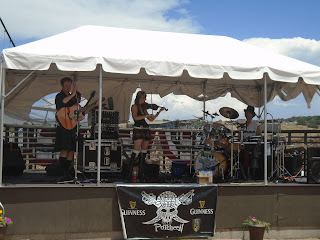 But we wanted to get back to the other side in time to photograph Alan and Dave as they zipped across the gorge, so we walked back, stopped for ice cream, and parked ourselves on the balcony in the shade. That was when I realized my camera was missing.

I was pretty sure I'd left it on the bench in front of Potcheen. The visitors' center didn't have it, so I walked the bridge again and checked the stage area, giving a wave and a holler to Alan and Dave as they sailed through the air a few hundred feet away. The camera wasn't there, but the drummer, who was on break, said an employee had picked it up. After giving him a hug and a compliment on his band's music, I went to the movie theater, who called the visitors' center. This time they had my camera, so I walked back again.

By the time I was reunited with my technology, my three friends were sitting at a table indoors, discussing their ride. It was short, they said, but had a great view. 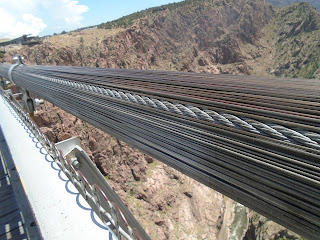 On the way back to Cañon City, Alan took us over Skyline Drive, a short one-way piece of road that runs the crest of a ridge. It's several hundred feet over the surrounding flats, with steep sides and only enough width for a single car. The view is just amazing, and there are dinosaur tracks on the northern end.

We returned to the house in the mid-afternoon, to find everyone sitting around the kitchen table, chatting and drinking.

"Make me one?" I asked Cider, who was refreshing his drink, and he nodded.

I got out the baking ingredients again and set about making more pie crust. I knew I had enough filling this time, having bought an entire bag of apples, and I found cinnamon and nutmeg in the cupboard (this rental house was stocked amazingly well, both with ingredients and with tools).

Dave and Alan set about peeling and slicing apples, and Cider handed me a glass that was at least half rum. I cut butter and divided dough and drank, and by the time the crust was chilling in the fridge, I realized I'd forgotten to eat lunch. But we had nowhere to be for the rest of the night, and I wasn't the first one into the booze, so it didn't matter. 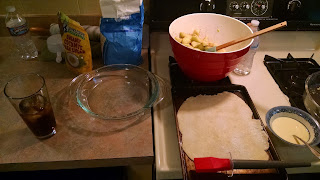 Drunken baking is actually a skill I practice with some regularity, so the pie came out great. The human amoeba moved to the back patio, where Tracy announced that getting back together with this group every year was just like slipping back into a pair of dirty underwear. We all agreed we couldn't wait to do it again. 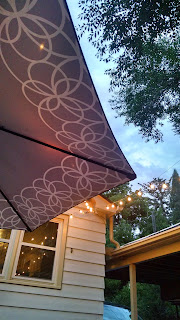