Saturday began at 5am; miles don't happen without putting in the time. I put on the padded shorts I'd been ignoring since arriving in Colorado, then my leather and my rain suit, as it was pretty chilly. By the time I got outside, Cider had already moved my bike out of the gravel and hooked up the trailer. We packed the last of our things in, made the hugging rounds, and headed into the rising sun. 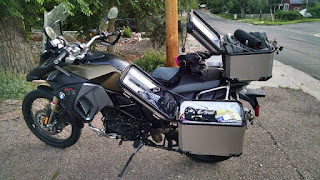 He had warned me that Kansas was a terribly boring way to go home, and that normally he'd take the extra hundred miles to go via I80 instead of I70. But I wanted to see my cousin in Pittsburgh, and besides, I'd get to add both Kansas and Missouri to my list of states I've ridden in, so Kansas it was.

The first stop, still in Colorado, was warm enough to remove my rain gear and hoodie. I got a coffee. A group of touring bikers with trailers came through the station at the same time, but I didn't get to talk to them. I've noticed that when I appear to be traveling with Cider, I almost never get approached for conversation. When I was traveling on my own, it was a rare stop that I didn't chat up some random stranger about bikes and road life. This time around, it was a rare stop that I spoke to anyone other than my road companion.

Part of it is that I approach others less often; there was more of a push to make time on this trip, so I didn't want to hold us up by getting chatty. But it's something else, too, that keeps other people from opening a conversation with me. Maybe it's just that I don't look lonely, or maybe it's that Cider's big-black-bike-and-sleeved-out-tats look scares people off. It's the only downside I've identified to traveling with company.

When I mentioned it to Cider, he said that he actually tries to look as grumpy as possible so that people don't approach him, because he hates talking to strangers.

"And it's always the little old ladies who come up to me," he said, "And ask about my tattoos! What the hell." He mimed someone pointing at his arms and imitated an old voice. "What's this one? And this one?"

I cracked up and hoped that I would get to see this sight for myself.

Kansas was exactly as promised: long, flat, straight, and boring. Also hotter than the ovens of hell. My bike registered 93 to 96 degrees for at least eight straight hours, and there weren't even scraps of clouds to hide the sun. I sun screened my neck and shoulders, the only parts of me that were available for burning, and warned Cider to do the same. He said he'd be fine.

The first Kansas stop I spent hiding in the shade and eating jerky (after the horrified realization upon purchase that their sales tax is over 10%. Holy crap, Kansas). This particular gas station had a sign we both appreciated. 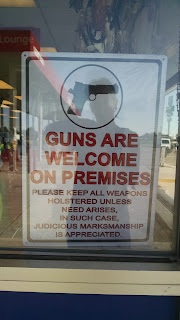 The next stop necessitated going inside a building for air conditioning and a milkshake (Cider) and fried might-be-chicken pieces (me). He slumped in his chair and looked downtrodden.

"Miserable," he replied. "How are you doing?"

"Great!" I responded, licking honey mustard off my fingers. "I love the heat."

"I forget that about you," he said, shaking his head.

"Yeah, I may be native to New England," I said, "But I'm not really built like it. I hate winter. I'm built more like I'm from Texas."

"Why do you still live there?" he asked.

"It's home," I said. Then, as we were getting back on our machines, "Do you want some sunscreen?"

My iPod had died during the morning's riding; the hold switch that locks the buttons wouldn't release, so I couldn't operate it. Cider pointed out that I could download an FM tuner for my phone, so I did, only to discover at the next gas stop that it was actually eating my data at an alarming pace. Annoyed, I turned it off and rode without music.

We continued to rack up the miles as we baked our way through the afternoon, and eventually it was time for me to book a hotel. I picked one on the eastern edge of St. Louis so we could start the morning headed away from rush hour.

Cider's arms had gotten so red by that time that his tattoos almost seemed to be disappearing under the shell of a lobster.

"Can I please put some sunscreen on you?" I asked, waving the tube.

"That's why I wear sleeves."

"I guess I could put the long-sleeved shirt on."

"That counts as sunscreen!" I encouraged him. He applied the sleeves and we rolled out again.

Around sunset we got Subway sandwiches for dinner, and I sucked down my third canned coffee drink of the day.

"How many of those have you had today?" Cider asked, and I told him. He gave me side-eye. "So you've had more of those than I've had Red Bulls. But half a Red Bull makes you hallucinate?"

"All I can think is it was the interaction of the Red Bull and the Tylenol," I said, shrugging. "I know it makes no sense. Maybe Red Bull alone is fine. But the other thing that doesn't make sense is trying it again when I'm still out here riding." 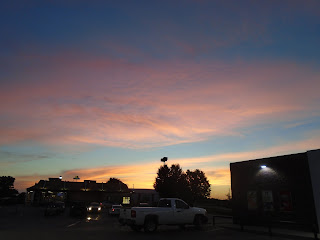 Our last gas stop of the day was at the tail end of a beautiful sunset. I parked behind Cider, since it wasn't my gas stop, and got off the bike to take a picture. Then I looked at the front of the building and poked Cider in the shoulder.

"Did you see where we stopped?" I asked.

"What? No." He looked up and started laughing. The store was called Abel's Quik Shop. I took a picture of that too before going inside.

"Did you mean to do that?" Cider asked when we were back at the bikes. He was pointing to the spot where my hand guard was touching the top edge of his trailer.

We got back on the road to St. Louis as dark fell for real. Traffic got heavier as we closed in on the city, and I had to shorten the distance between us so we didn't get separated. My phone had decided that it would no longer boot or take a charge, so if I got lost, it would be tough to find either Cider or the hotel.

We'd done enough miles together at that point that I could read his mind about traffic decisions. I didn't have to wait for the turn signal anymore to know what the next move was going to be. It started to feel like having a good blocking partner in derby, when the communication is so fluid that you appear to move together magically, like the flock of sparrows that all change direction at once with no sound and no apparent leader. We zipped through traffic with efficiency, leaving the cars and trucks in our collective dust.

In the last fifty or so miles, I was reading his impatience and could almost hear the things he was saying to the cars blocking our open-road freedom. I tucked myself up against the corner of the trailer and waited for him to dodge into the other lane. And waited. Finally I ducked over and sped up, taking the open block to the right of the slow car hanging around in the left lane. I looked over my shoulder, encouraging him to take the space next to me, but he didn't.

"You don't understand," he explained to me later. "Once I start that shit, I don't stop."

I had no argument. That's a responsible friend.
Posted by Skipper at 20:12