Bishop's Castle and a Family Visit

In Rye, Colorado there's a place called Bishop's Castle. One man has been building it by himself since 1992, and he allows people to explore and take pictures and climb into the towers, asking for voluntary cash donations in return. Kimmy heard about the place while looking for things to do, so on Wednesday the three of us got on the bikes and headed out there.

We headed south on 115, then turned left. I hadn't bothered to map the route or learn anything about the road; I was so accustomed to following Cider that it just seemed unnecessary. What hadn't occurred to me was that I was accustomed to following him on the highway. We sailed into the first hairpin turn doing the same speed, and halfway through it I had the bike in a deeper lean than I was comfortable with, and I was forcing myself to breathe. We made it through, and not half a mile later there was another one. After another five seconds of pants-shitting terror, I made it through that one as well, and I decided to slow down and inspect the turns for myself. 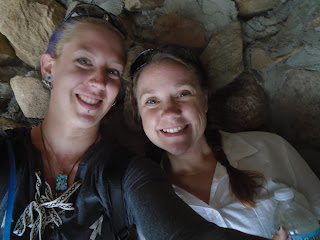 The road to Rye was quite fun, really. There were sweepers and switchbacks and nice long runs with a mountain view. I pushed myself carefully, reminding myself that there was nothing wrong with hanging back and taking my time, and that if we got too far from each other he'd find a place to wait for me. 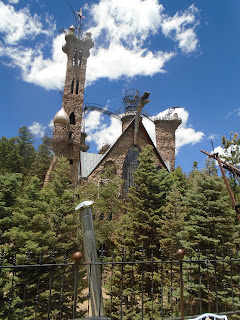 We reached the castle together, no waiting necessary, and the three of us climbed into the drawbridge tower and photographed the great hall and ascended the hand-built wrought iron staircase into the iron cage above the dragon's head. I didn't make it all the way to the top level, but came down again from one level below. The tower was shaking with our movement, and I felt that pushing myself to go all the way to the top might sap some of the focus I needed for the ride back. 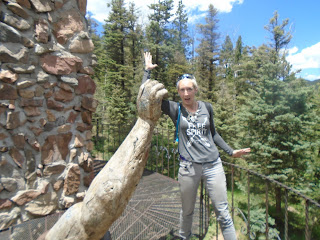 We met John Bishop, the builder of the castle, briefly. He was carrying a bucket and looking very hurried. He gave us a gruff hello on his way to whatever the day's task was. 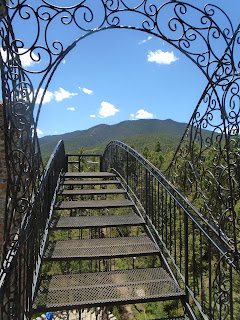 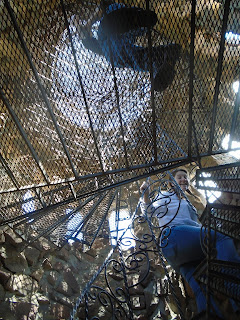 We went back to the house, and Mike showed up not long afterward. He asked if we had witnessed him nearly drop his bike trying to park it in the driveway. We hadn't, but I assured him that if he had, he wouldn't have been the first.

I was sorry to miss out on the rest of the group's evening, but I had my own plans in Denver. After stopping for wine, I arrived at Steve and Ann's almost on time. There were hugs all around, and when Ann asked how my drive from the Springs had been, Steve said, "What? You drove here all the way from Colorado Springs?"

I raised an eyebrow. "I drove here from Massachusetts."

Ann laughed. "Sometimes we forget the relevant facts," she said.

Steve grilled steaks for dinner, which were so good that I actually had seconds. My food habits on the road basically consist of "eat very little," but occasionally I can be coaxed into eating more normally. After dinner we went up to the porch, where Steve directed me to his favorite chair and told me to slouch until I couldn't see the houses anymore. I understood his excitement over this view; the porch rail blocked off the rooftops, and all that was left in my field of vision were trees and mountains. I could easily imagine watching the sun rise with a cup of coffee in hand, pretending the rest of the city didn't exist. 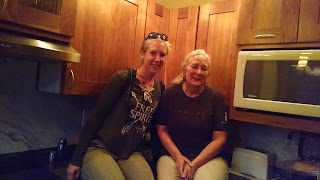 Steve not only allowed but encouraged us to sit on his kitchen counter for this photo. I'm pretty sure Hell has frozen over. (Steve, if you're reading, I love you guys!)

On my way south again, I stopped for gas and found a text from Cider saying that everyone was going to bed but the back door would be left unlocked for me, and would I please remember to lock it before bed. I said no problem.

Ditching my jacket with the rest of my things, I started inspecting a window into the kitchen. The screen raised without a problem, but the window itself was locked. I tried another one, and another one; same situation. I tried sliding a credit card into the jamb of the back door, but the weather seal foiled that plan. Finally I decided to knock and hope that either a human or a dog would hear me.

I should have tried that first; Julie was awake and let me in immediately. An hour later, I had taken a shower and was chilling on the couch when Cider walked in from the kitchen and gave me a confused look. Poor cell reception in the basement meant that my message had just gotten through and he thought I was still outside. He shook his head at my apparent nonsense and returned to bed.
Posted by Skipper at 18:27