Pike's, Pie, and One Green Muppet

Everyone comes to Colorado to get high, or so they say. Most of us don't smoke, though, so we went for a natural high: the top of Pike's Peak.

My butt was sore from so much time in the saddle, so I jumped into the empty space in Dawn's van. Dawn, Kelly, Scotty, Danielle, Alan, Julie, and myself filled the van, and Cider and Kimmy followed on the bike. We formed a spontaneous news crew, Kelly calling out the temperature as we rose in altitude, Dawn giving traffic reports, and Julie taking on world news and events.

We stopped at the reservoir to take pictures and feel how cold the water was. It was definitely chilly, but honestly, I would have gone in it. The sun was high and the air was still summery. 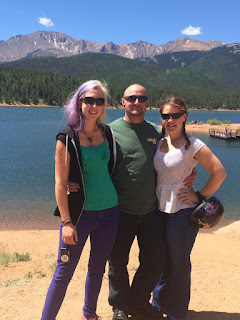 Our next stop was the peak, but getting there was a trial. The driver two cars ahead of us seemed to be unfamiliar with mountain driving, and slowed down to walking speed for every single curve (and there were many of them). Julie started fretting about Cider and whether he could keep the bike upright at this speed. We craned our necks around at every turn to make sure he was still there.

"I need to calm down," Julie finally said. "There's nothing I can do about this."

Someone decided there was actually something we could do: express our frustrations to that driver very loudly.

It quickly became a contest.

Scotty put on a New York accent and quoted South Park. "You're worse than a pussy!" he called out. "You're just a pussy faht! Fuckin' queef!"

Eventually we made it to the top and found parking. Cider got off the bike long enough to say they were going back down, as the altitude was getting to him, and he and Kimmy took off. 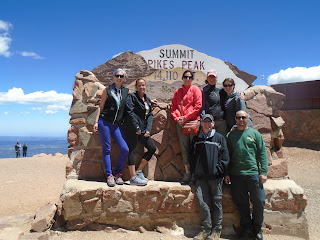 I took some obligatory tourist pictures with the sign, admired the scenery, and wandered through the gift shop. Dawn and I found each other near the front door and made a loop of the peak together, stopping to admire the rail car as it went by. For being in such a small area, the group dispersed with remarkable effectiveness, and it took us a while to put everyone back together again. Several people were having issues with the altitude, so we headed back down to thicker air. Scotty had bought donuts for all of us, and I spent half the ride down noshing and pulling crumbs out of my lap. At one of the stops, we pulled over so that Kelly and Dawn could see snow. The rest of us were nonplussed and stayed in the van, but the two Arizona girls were excited. 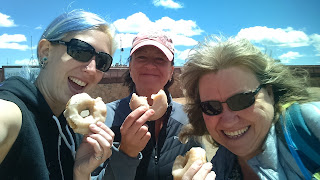 Back in town, we headed to Pizzeria Rustica for lunch. We sat outside, where they provided water for the dogs, and we did an awkward dance trying to move the umbrellas around for maximum shade. The patio was uncomfortably hot, but the food was excellent. I was especially impressed by Dave's pesto.

After regrouping at the house, a handful of people went off shopping and a few more went to Seven Falls. I watched Kimmy and Cider play cards for a while, then went up to the kitchen and started making pie crust. During a discussion on food and cooking the day before, I'd admitted that my specialty was pie, and some smart person had said they doubted me. There's no better way to get me to do something. Besides, other people had been showing off their cooking skills at breakfast and dinner; Dawn had made frittata and breakfast burritos, and Gene even converted me to biscuits and gravy. I felt it was my turn to pitch in.

I'd gotten ingredients the night before but underestimated the amount of filling the house's pie dish would hold. I looked around for filler but found nothing satisfactory. I was relaxed and wearing sandals and really didn't feel like going to the effort of pulling the bike out of the gravel patch just to go buy berries. After debating for a moment, I asked Gene and Bekah if I could borrow their car.

Gene ended up driving me to the store, because their "car" is a behemoth with very poor visibility. I was puzzled by how he even got it to fit down the side streets in the neighborhood. When we arrived at the grocery three blocks later, I felt like an idiot and wished I had Googled the location of the store before asking for help; I could have walked. Partly to justify the use of the vehicle, I bought ice cream.

Cider and Kimmy had gone to dinner in an airplane (a decommissioned aircraft turned into a restaurant), and the three others left in the house were chilling out. With the kitchen to myself, I had nothing better to do than lattice the pie, something I almost never bother with. I'd done the crust from memory and the filling from invention, and was hoping for the best. 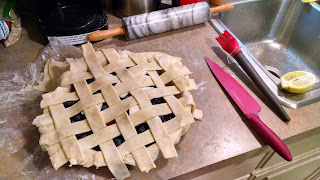 When the diners, the shoppers, and the sight-seers returned home, they all announced how good the house smelled. Everyone gathered in the kitchen. 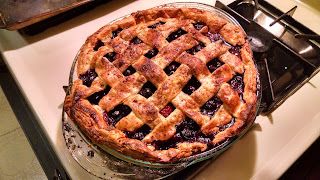 "Who wants a piece of Wrecker's pie?" Cider asked, and suddenly the pie jokes were flying. They continued until the pie was just a memory and the dish a mess of crumbs. Kelly found something sticky on the floor and asked what had been spilled.

"Wrecker's pie," Cider answered. Then, "Hey, I warned you I don't have an off switch."

After pie there was more fire play, and then Scotty got out his guitar. I'd heard tale of his version of the Rainbow Connection, and it was everything it was cracked up to be (which is saying something, given how favorite stories can grow with time). If I closed my eyes, I swore I was sitting next to Kermit the Frog.

As we talked and sang and enjoyed the fire, thunderheads were forming on the northern horizon, and flashes of lightning started to make themselves seen over the flickering of the fire. A few people packed it in and went to bed, and a few of us moved our chairs into the middle of the lawn to enjoy Mother Nature's show. It never actually rained where we were, so we sat out for quite a while, taking pictures of the sky, before finally turning in. 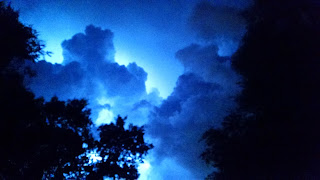