On Sunday morning, after 830 miles on Saturday and about five hours of sleep, the road crazies really set in. I dragged myself awake, cruised the hotel's breakfast bar, checked out, and met Cider at the bikes. We gassed up and cleaned our face shields across the street and then got back on I70.

I had coffee and music, and I was wired. The first hundred miles flew by as I rocked out to Bif Naked, glad to be wearing a full-face helmet so I could sing without eating bugs. Had I been on my own, I would've skipped that first gas stop entirely; I felt amazing, full of the joy of the open road. The air was pleasant, the sun beautiful, the traffic quiet.

The agreement (and requirement of the Vaquero's tank) was to stop about every hundred miles, so we pulled into a gas station somewhere in eastern Illinois. I parked at the edge, left my gloves and helmet on my seat, and went to pester Cider. After all, what else did I have to do?

"Hi!" I chirped, jumping over the curb and landing next to him.

He turned to look at me, wearing the expression of someone who was asleep but somehow still standing. "No," he said.

"Yes!" I said, grinning and bouncing.

He put his hand in my face and gently pushed me backward, glaring while I laughed. I stepped away and hopped up on a railing. Cider moved his bike from the pump and then went inside. I considered getting a snack but thought it might mess with the perfect energetic equilibrium I had going, so I leaned back against the pump to wait.

I didn't realize I was grinning absently at the ceiling like a maniac until Cider returned and stopped several feet away from me. I turned to look at him and was met with a suspicious stare.

"What?" I demanded, then started cackling and slid sideways off my perch. He just shook his head and went to get a Red Bull from the trailer. I followed.

"There is something wrong with you," he said as I bounced up and down.

"Nothing's wrong," I said. "Are you kidding? This is amazing. The weather is great. I feel so good."

We got to talking about riding weather in New England, and I said most of the year wasn't good for riding.

"Most days in New England are great," he argued.

"That's because you're a popsicle," he told me, and I broke my ten-second streak of calm and started laughing again.

"That's us," I said. "Lollipop and Popsicle, the Motorcycle Maniacs." Once back on the road, I realized we were really Grumpy Cat and Nyan Cat. 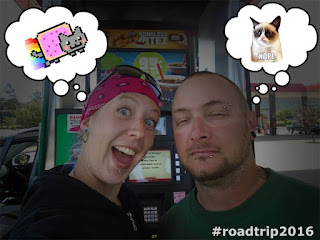 Very little of the rest of the day sticks in my head. There was one gas stop at a creepy, dirty gas station where I was serenaded by a woman screaming at her sister from the cab of a truck. Cider somehow missed the whole exchange.

At the last stop before hitting the Pittsburgh area, I tried to fill my Camelbak but the station didn't seem to have water. We were making good time and Cider was texting my cousin Carl with updates, since my phone hadn't come back to life. My iPod was dead again, refusing to take a charge.

The concrete skirt around the pump was tilted left. The bike leaned toward me as I dismounted, and I knew I'd need help uprighting her again when it was time to move. But by the time my tank was full, Cider had already pulled away and disappeared to another part of the parking lot. I decided to get on and try, and without interference from my brain, my body figured it out - I pushed her upright with my thigh before I was fully in the saddle, and we were off like nothing had happened. It only took me 3,500 miles to figure out the trick.

Still on 70 at the edge of the city, we hit a traffic jam. After ten minutes or so of walking, we took an exit for 470. Then we hit another traffic jam. That one took a bit longer to get out of. Eventually we made freedom, and then hit more traffic on 376. Headed toward the Fort Pitt tunnel we hit a fourth snarl, and that one was by far the worst. It took probably half an hour to get from the top of the hill into the tunnel. It was hot and sunny, and shady spots were few and far between. I killed the engine and walked the bike most of the way down using the momentum of the hill to carry me. I ran out of water and wished for more.

The tunnel itself took another ten minutes, and when we reached the bridge at the end, the problem became clear: someone had crashed their car in the middle of the bridge, closing two of the four lanes and forcing traffic to take the far left or far right lanes. I couldn't understand how someone had gained enough speed in that area to do the amount of damage that the car had taken. I thought some curse words at them for crashing where they had, then moved on.

Past the next exit ramp we finally got an opening, and we zipped out of the line of crawling cars and opened our throttles. That was when I felt a small but alarming tug on the cable plugged into my helmet. I didn't have to see it bouncing away to know my iPod was gone. We were in the middle of a curving bridge with no shoulder, so I didn't even try to stop; it wasn't worth my life or the bike. My shopping list lengthened to two iPods and a cell phone.

We arrived at Carl's in the late afternoon and invaded the house with our sweaty, sticky, gross selves. I introduced Cider to Carl and Alisia, and Vivi came running out with even more bounce than I'd had that morning. We sat at the dining room table and talked about travel and kids while Vivi climbed into our laps, poking at my labret and sticking her fingers through the tunnels in Cider's ears. She leaned toward him and made a ridiculous evil face, and he made one back.

"I like munchkins about your age," he said, and she giggled.

I killed three glasses of water in short order and then actually killed the glass by dropping it on the tile floor in the kitchen. Cider put his hand over his face.

"She's a disaster," he told Carl, and I had no grounds to deny it. I swallowed my hysterical laughter long enough to help him sweep the glass off the floor and soak up the puddle of water. Then I got myself a plastic cup.

"You sure you don't need a sippy cup?" Cider asked.

"I bet I can find one," Carl offered.

"I think...I think I can handle it," I said, not entirely certain I wouldn't be cleaning water off the furniture in the not-too-distant future.

Carl set out a selection of zucchini pasta, fish sticks, and dumplings for dinner, and we dug in. After we ate, the conversation turned to work, and Alisia told a story about one of her patients who had been dubbed The Naked Man after he bolted out of his room without clothes, ran circles around the table in the common area, and finally grabbed the documents she was carrying and took a large bite out of them. Carl followed that with a story of someone who had built "Stonehenge" out of potato chips and his own excrement. By that point I was resting my forehead on the table and nearly crying with laughter.

I realized after a very welcome shower that I'd left my sweatpants in Colorado, so I came downstairs and eventually went to bed dressed in a grey Rugged Maniac t-shirt, a blue tie-dyed skirt, and pink wool socks. It seemed like an accurate representation of the inside of my brain that day.
Posted by Skipper at 13:10