I've been in physical therapy for the past couple of months for a herniated disc in my low back. When I told my PTA I was going on this trip, she raised her eyebrows and said, "Well that'll be a test of your back." I bought a back brace and lots of ibuprofen and Tylenol, and the PTA gave me some stretches to do at gas stops.

Our first stop was 145 miles in. My back was cramping, so I did some stretching and took some ibuprofen. After that the stops started to run together. 260 miles, 370, 470...I put gas in the bike every other (the joy of a huge tank), snacked, stretched, and took pain pills. I played with different riding positions and discovered that depending on where I rest my feet, I have a choice between back pain or knee pain. Infinitely preferable to being forced into one of the two.

He calculated the mileage and booked a hotel in Peru, IL. "That's it. We don't have a choice now. I'm going there, and I hope you're coming with me."

"Oh, I'll be there," I said. But I'd been feeling sleepy for the last fifty miles. "I never thought I'd say this, but can I have one of your Red Bulls?"

"Of course. There a cold one in the cooler."

I drank half, took some Tylenol, and we were back on the road. 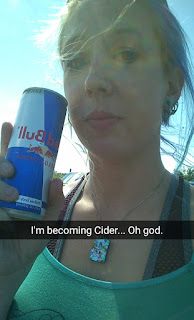 Maybe twenty miles later, I started to feel strange. Tired, unsteady, and stupid. I wondered if the exhaust fumes were getting to me, and zigged back and forth in my lane, trying to position myself where I couldn't smell Cider's bike. I couldn't seem to control my speed, though, and I kept finding myself tailgating his trailer.

So this is what happens to me when road exhaustion sets in. I thought about stopping, but figured I should get as many miles done as I could while I still could, since I was probably just going to keep getting worse. Besides, the thought of stopping was actually terrifying. I could keep the bike going on the road, but when I imagined trying to do complicated things like take an exit and come to a stop, all I could picture was stumbling off the bike and dropping it on myself. So I rode on.

I was wondering how other bikers do it. Why was I more affected by the exhaust fumes than most other people? We overtook yet another tractor trailer, and as we went by, I saw it wobble and start to tip over. Alarmed, I scooted sideways to get away. Cider showed no sign of having noticed anything unusual, and as we completed the pass, I realized the truck was fine and the only problem was in my head.

Eventually we stopped for gas. "You ready for some dinner?" he asked.

"I'm ready to do something other than ride this damn bike," I answered.

"Me too," he agreed. But the diner we had found was closed for renovation, so after filling up the bikes, we hopped back on the road. Twenty miles further on, we hit a rest stop and actually had dinner. Even before we sat down, I was already feeling better. By the time I finished my stromboli, I was ready to ride again. In fifty more miles, my head was completely clear, and I realized it wasn't road fumes but in fact something about the Red Bull (possibly combined with the Tylenol) that had messed with my head. I swore not to drink any more, and was grateful I'd only had half the can.

Miles 600-700 weren't bad at all. By 900, I was cold, and by 970 I was sleepy again. I've never had a problem with being sleepy on a bike before, but I felt about ready to topple off into the road. I started singing to myself to keep my eyes open.

At mile 1010, we finally arrived at the hotel. We parked under the portico (something many hotels apparently allow bikers to do if you ask), grabbed our things, and wandered inside in a fog. At least, I was in a fog. I have a vague memory of taking a shower before falling face-first into the bed and passing out cold. 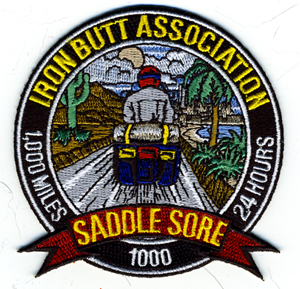