The rest of the morning was free of unexpected dirt encounters. We sailed through mile after mile of Monongahela, passing by a science center where an enormous radio telescope rose up through the trees. I would've stopped, but we were trying to outrun predicted storms.

In the middle of the day our path returned us to the interstate. We ran along 64 to 77 to 81 to 26 and finally pulled off in eastern Tennessee. The website of Woodsmoke Campground implied that they were open. The woman who came huffing up to us in a bright pink sweatshirt, looking put out, informed us otherwise.

"I checked your website," I told her. "It didn't say you were closed."

"We don't put that up there," she told me testily. I kept my opinion to myself in exchange for directions to a campground that was open.

A few minutes later we were checking in to River Park Campground. It had been long enough since our last shower that we were willing to pay for space to pitch the tent, and this place was worth it. It was $20 for the night, and there was a lovely shower and bathhouse, a river view, and even a diner. A caboose had been made into a pair of adorable cabins around which the other camping was centered. 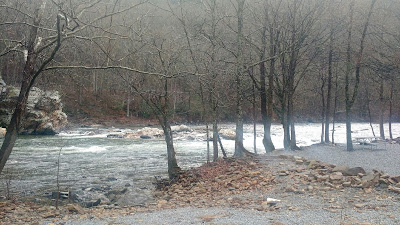 Our neighbors invited us to hang out around their fire, but by the time we had set up our tent and showered, everyone had gone inside. Some of the campers had clearly been there a long time, and the place closed up early like a small town. Before it was even dark everyone had disappeared.

The wind howled overnight, crashing down the mountain and landing on our tent before continuing into the river basin. The tent bowed so low it touched our faces, and I wore my riding earplugs so I could sleep, but we stayed dry. The next morning saw us waiting out the pouring rain over fried eggs in the diner. When it cleared, we turned west and south and rode into Alabama.

Most of the day was interstate riding. It doesn't lead to the most interesting exploring, but it does get the miles done when you're chasing warmer weather. At sunset we were hungry, and we parked our butts at the bar in an Applebee's and befriended a couple of local riders who showed up shortly thereafter. Then we rode into the darkness.

The road into Blue Creek was lovely and twisty the next morning, but in the darkness it was a bit of a challenge. Some of the curves were gentle and some were hairpin, and there was no light save what our headlights were throwing. It was impossible to locate any of the actual campsites in the dark, so we rode all the way through to the parking lot at the end and popped up our tent by the river.

We were lying in the dark reading when a strange light shone on the wall of the tent. It flashed once, twice, three times, and then was gone. I sat up, listening for footsteps or a car engine, and heard nothing. After a long moment I unzipped the door and poked my head out. It took me a second to process what I saw, but after a moment my brain assembled an enormous barge making its stately way up the river. The light was its headlight, now cutting a path into the darkness far beyond us.

"A barge!" I said, poking Rogue, who had disappeared into her sleeping bag to hide from the cold. "Holy shit, look at this!" We sat in the door of the tent and stared in wonder until it passed, the water churning in bright swirls in its wake.
Posted by Skipper at 18:52