A Surprise in Monongahela

Rogue set up camp in Monongahela while I started a fire. At least, I tried. Nothing would catch. Eventually Rogue joined me, and still the two of us together couldn't get anything to light. A few things in the bottom of the fire pit created a bunch of smoke, but flames were in short supply. There was plenty of dead wood, but everything in the area was wet.

"Pick one or the other, you smoldery sack of crap," Rogue said to the pile of sticks, and I nearly fell over laughing.

Foraging in the woods near the creek turned up some large dead azalea branches under some even larger live azaleas, and they turned out to be the one thing that would burn in the Unburnable Woods. Even the pine branches were having none of it, and when the azaleas were gone, so was the fire. We turned in early.

The next morning was disgustingly wet. It hadn't rained, but the dew was some of the worst I've seen anywhere. A small rainstorm would have left the tent fly drier. We packed up, shivering in the chilly morning, and hit the road. 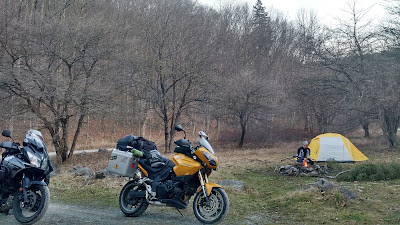 Upon entering the forest, the road had been dirt and gravel, the big chunky gravel that turns bikes into brain-shakers. My first sign that something had changed overnight was the enormous tire tracks left where there had been a large yellow piece of machinery. We came around a bend and suddenly the road was a series of piles of loose dirt, mounded a foot high along the centerline. The road grader was working its way slowly toward us in reverse.

I stopped and waited, uncertain whether I should pass or whether the road crew had any idea we were there. The grader lumbered a few more yards and then came to a stop as well. When everything had been quiet for a few seconds, I started forward.

The dirt was freshly turned, soft and shifty like a cornfield, and there was a hill between me and the grader-free left lane. I don't ride dirt, so I just attacked the hill and hoped for the best. My angle was bad and we swam through it with almost no control, and for a couple of very long seconds I was sure we were going down.

Somehow we made it through, and on the other side of the grader a couple of men in safety vests were standing at the side of the road, grinning broadly. They waved with enthusiasm as I passed by and waited for Rogue, who also survived the dirt with two wheels down. We found pavement again as I contemplated the weird things that happen on the road. In all the scenarios I might have imagined, getting graded into our campsite was not one of them.
Posted by Skipper at 10:26