We found Amber's house without trouble, at the end of a short dirt road. We parked on the concrete skirt of the garage, behind a stable of Harleys, and she and her partner Rock came out to greet us. He prefers to be known as "that asshole biker," but "Rock" is shorter, so I'm going with that. 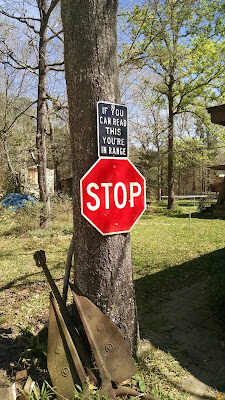 Amber's daughter Sofia showed us to the cabin in the back yard, an adorable gamer cave that was occupied by Amber's oldest when he was home from school. With a private bathroom, air conditioning, a mini kitchen, a sofa, and a comfy bed, it was heaven to crash in after so many nights in the tent. Her younger son Eli came over as we were getting our laundry together and introduced himself too.

When we had gotten comfy - which for me meant exchanging my riding boots for flip-flops - we joined them in the kitchen of the main house. Rock was making chicken schnitzel, which Amber told us was his specialty. I asked if we could be of any help. Amber said absolutely not, and Rock said his bike needed a wash.

Dinner was wonderful. I stuffed myself until I had regrets, and then we sat around a large fire on the back porch and toasted marshmallows and drank wine. Four bikers who all ride a lot and like to talk will do so for hours. There were stories of rain and snow, good roads and bad roads, breakdowns and strange encounters and late-night rides. It was easily midnight before it occurred to any of us to go to bed.
Posted by Skipper at 19:00