Bienville: Closed for the Season

Difficult though it would have been in the dark, I ended up wishing we had made the effort to find a dedicated campsite. Two cars came by during the night, one of which contained screaming passengers and did a burnout in the parking lot before leaving. Early the next morning there were fisherman dropping boats in the water. It would have been a shame to miss the barge, but I would have slept a lot better.


The morning was sunny but cold and windy. I used the tarp to build a windbreak for the stove so I could cook breakfast, and while we were packing up, the tent suddenly made a break for it and rolled down the hill toward the water.

I ran after her and the rolling ball of nylon, and we caught it just at the edge of the river and dragged it back uphill. It was two more days before I realized that my Kindle and pocketknife had been inside, and now they probably have a home with some lucky person fishing on Blue Creek that day. 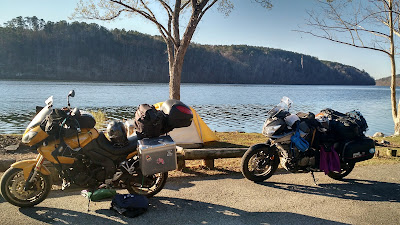 In Meridian, Mississippi, we stopped at a hardware store so Rogue could replace a nut that had fallen off of Zee and left her clutch handle loose.

My favorite free camping website showed me many options in the Bienville National Forest, stating they were open year-round. That made sense in the South, so I didn't question it.

That turned out to be a mistake. Several closed gates, a lot of dirt roads, and fifty-ish miles of U-turns and frustration later, we were at a gas station in Forest. The sun was down and I was cold and grumpy. We couldn't even sneak into any of the closed campsites, as the gates extended at the edges into thick forest.

"What do you want to do?" I asked Rogue.

"What are the options?" she asked. "We keep going and maybe find camping eventually?"

"Pretty much," I said. She looked as defeated as I felt. We made a reservation at America's Best Value Inn.
Posted by Skipper at 19:33