A year ago last summer, I saw a post in the LadyBiker Facebook group for the first annual Lace, Grace and Gears women's motorcycle rally. I shared the post and asked if anyone wanted to go with me. Rogue said yes, so I taught her to ride and we took our first long bike trip together from western Massachusetts to Beaumont, Texas.

Fast forward a year and we've ridden all over hell's half acre, spent months living on our bikes, moved to Houston, and are coming up on the second annual Lace, Grace and Gears. This year's event was moved to Bandera, where there are better riding roads.

We left Houston early on Friday afternoon and spent several hours buzzing peacefully west on I10 toward San Antonio. Forty miles out of Bandera we found rain. I wouldn't have minded except that I left my rain suit and jacket liner in Houston, thinking I wouldn't need them. Those last forty miles were a bit chilly, but we made it to the rally grounds at the Twin Elm Guest Ranch. I was excited to see a large field full of tents alongside a park full of RVs - last year our tent had been one of only two. There were also more adventure bikes, including a Tiger that belonged to the guy camped next to us. 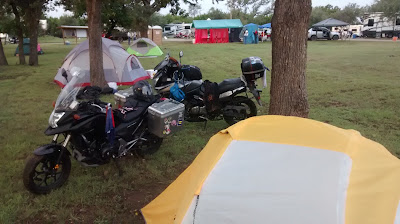 Apparently Bandera had seen three solid days of rain. The entire place was a mud pit, and everyone's bikes and boots were caked in slimy, sucking goo that became tough as nails and impossible to remove when dry. Oh well, I have an adventure bike for a reason. I bounced off the asphalt and dove gamely into the tenting field, skidding through the mud and eventually parking under a tree near the middle. Rogue followed, a bit more hesitantly after her last experience riding in rain, but she made it. Spirit, the Tiger rider, warned us that he had initially camped in the spot where we had set up, but found his tent full of ants and had to move. We kept an eye out, and by the end of the weekend we had a few visitors, but since it stopped raining they weren't as numerous as we feared.

Through the RV park was a row of vendors, and a short walk beyond those tents was a sound stage, a beer tent, and a row of food trucks. We got some tacos for dinner and then found Layne and crew at the bar. She was clearly stressed about the rain; it seemed some people had let the mud ruin their party and seen fit to complain loudly about it. The forecast for the rest of the weekend was clear, though.

Sleep was scarce for us both that night. Someone nearby thought that 2am was a great time to use an impact driver for nearly an hour, and I got cold because I'd brought my summer sleeping bag, which is literally just a fleece blanket with a zipper. I didn't realize how much temperature difference there would be between Houston and Bandera.

Saturday morning we got breakfast at the OST diner in downtown, then wandered over to the parade lineup. By chance we were right next to Sherry, Rogue's doppelganger that we had met at LGG 2016. After a couple of hours chatting with everyone around us, a quick walk to the nearby river, and a lot of sun and sweat, the parade rolled out. A pair of horses and riders led us through downtown and back to Twin Elm. The streets were lined with locals waving and taking pictures. We totaled 732 lady bikers, not enough to break the record, but almost as many as last year. Considering the recent toll from Harvey and the three days of rain, it was hardly a disappointment. 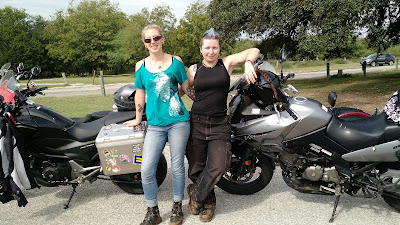 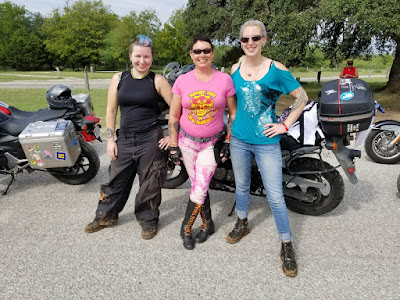 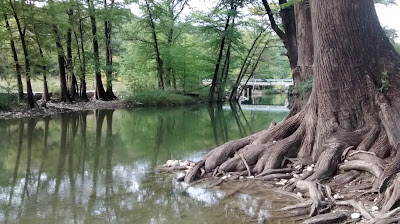 We returned from the parade to find that our tent had collapsed. One of the poles, already held together in one location by wire ties, had split in two more places. I used a knife and some pliers to remove the broken bits, cobbed it back together as best I could, and accepted that it would probably end up on my face in the middle of the night and shit happens. Rogue ordered a new tent for her upcoming journey to New England. 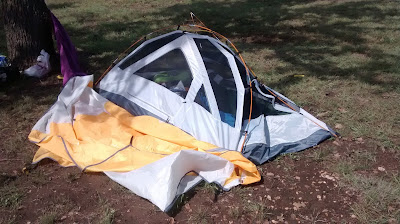 The rest of the afternoon was pretty quiet. There were supposed to be bike games (slow races, keg rolls, a weenie bite, etc.) but they were cancelled. Whether that was because of the state of the ground or because there had been some complaints about the sexist nature of the weenie bite game was unclear. With no plans to ride anywhere after that, I went to open my bottle of wine - and realized I didn't have a corkscrew. I tried the "hammer it with a shoe" trick but my boot didn't do the job. One tent stake and one screwdriver later, I managed to push the cork into the bottle and the problem was solved. 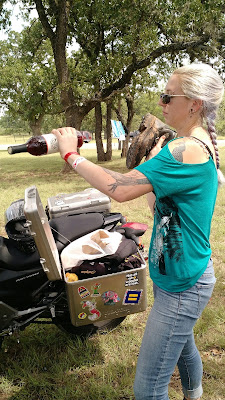 We were walking through the vendor tents when a woman with a pamphlet gestured at me. I paused to see what it was, expecting a sales pitch for something I didn't want. When I saw that she was advertising the Hoka Hey, a cross-country distance riding challenge rumored to only have one female finisher in its history, I stopped and gave her my full attention. It turned out that Junie, standing in front of me, was that woman, and not only had she completed it once, she'd completed it all six times. My heroine.

I was on the verge of putting the dates in my calendar for next year, determined to be the next female finisher, when she told me that only oil-cooled bikes are allowed to participate. That means a Harley, an Indian, or a Victory. My water-cooled adventure Honda would not be permitted at the starting line. Disappointed, I walked away. I'm not in the market for a new bike.

Half an hour later, Junie flagged me down again.

"I talked to the Indian rep," she told me, "About getting you sponsored. You should talk to the dealership. We want more young people involved in this."

Now that sounded like a plan. Excited about the renewed potential to face the legendary challenge, I bounced away to check out the band. We ended up following Toni to the other end of the ranch, where there was a brief demo of barrel racing and rodeo. Unfortunately few people showed up, but it was fun to see an American rodeo - I'd only seen bull riding live in Ecuador, despite having arrived in Houston during the famous annual rodeo festival. 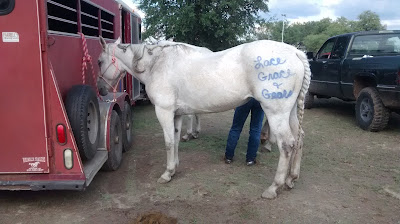 With everything up in the air, no one knew exactly when we were supposed to be doing our fire performance. Once dark fell, we spent a few minutes rehearsing, then gathered our props and fuel and showed up at the sound stage. Our timing was perfect. The bands were between sets and we were able to hook up our music to the main sound system. Rogue spun poi to a remix of the Halo theme, and I did an eating and contact staff set to Halestorm's song I Am the Fire. We finished the set with a partner breath off each end of my staff. I'd been concerned that we weren't rehearsed enough, but it came off without a hitch, and everyone said it was a great show.

On Sunday morning, we ate at OST again, then wandered into San Antonio to see the River Walk. At Ripley's Believe It or Not, we got pulled in by a pair of circus performers. When Red realized that we're also performers, he invited us to join his show. Rogue was scheduled to return to Massachusetts starting the next day, but I said I might be interested, and we traded phone numbers. So maybe I've got some sideshow fun in San Antonio now. I just wish it wasn't five hours away.