A Sad Goodbye to Bee

The problems with Bumblebee continued to get worse. When we arrived in Houston, we went straight to British USA so they could replace the fork seal that mysteriously started leaking again a month after I replaced it the first time. That plus a new front tire cost me $500.

Less than a month later, she began to have a starting problem, and in under 24 hours had stranded me in Pasadena. I had a passerby give me a push through a long parking lot to try to bump the engine, but after he nearly crashed me by pushing on one side of the bike, the engine wouldn't go. I had her towed ($180) up to Stubbs, who told me they didn't have the necessary diagnostic tools to troubleshoot her. Rogue picked me up and then brought me back with the jump-starting kit, and we limped her to British.

She was there for two weeks waiting for parts, and another $600 later we rode out with a new rectifier and stator. The auxiliary lights put on an obnoxious strobe show with the new hardware installed, and I returned to British and asked them to fix it. They poked around and announced that it was a loose connection. I said I could replace that myself, so I went home and replaced all the connections. The strobe show continued.

As long as I had her apart, I decided it was a good time to fix the gas leak, as well. I removed the tank and used JBWeld to epoxy every possible crevice, let it cure for the recommended 24 hours, and put her back together. Then I rode out to Bandera to go to a friend's wedding, and when I put the first full tank of gas in her, she started leaking again. 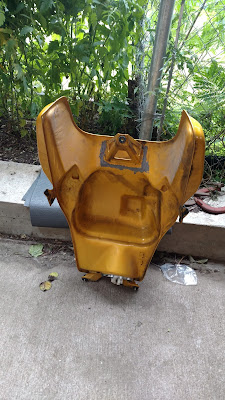 The oil leak was continuing in steady fashion, too. Every time the light came on I added a quart, and occasionally I wiped off the engine. Full Throttle had told me it was the valve cover gasket. And of course there was that mysterious case of metal shavings in the oil that I'd been ignoring since January...

I took her for an overdue oil change at Stubbs, and while I was there I inquired about a trade-in value. It wasn't quite time yet, but it would be good information to have.

The mechanic took his sweet time going over her, and when I got the report, it sounded like this: "Are you actually riding this? 'Cause we're concerned for your safety." Apparently all the seals in the engine were dried and cracking, and it was only a matter of time before she ejected all her oil.

I poked through the used bike lot and test drove a KLR650. It felt lazy, and the knobby dirt tires wouldn't lend themselves well to the kind of riding I do. "I don't love it," I told Justin, the salesman. "I want to love it."

I drove a Versys, Rogue's dream bike - it also felt sluggish, both in the throttle response and in the cornering. One round of the parking lot and I shook my head and put it back. On the showroom floor, I found a brand new 2015 black Honda NC700X. I'd done some reading on the CB500 and NC700 (sister styles of bike) and decided to take it for a spin.

It was on. I forced myself to park after several circles of the track-like area in the back of the parking lot. It was light, it was responsive, it was quiet, it was beautiful. They offered me $2500 on trade-in for Bee, Honda made a $700 down payment on my behalf from their "seasonal kick-starter" fund, and I signed my life over to Honda financing for the rest. This is how one goes in for an oil change comes out with a new motorcycle.

I gave Bee a hug (and uninstalled a few accessories) before riding away. She was really fun while she lasted, and I'll miss the face-melting acceleration and high suspension. But I won't miss the constant problems.
Posted by Skipper at 17:34