Rogue and I met in 2012 through roller derby. We've been best friends, teammates, and gym buddies for nearly five years now. Some of you may recognize the phrase "derby wives" as well.

The hardest thing about leaving home for me is having to leave our team. We play for the Furies and the Nyads of Western Mass Roller Derby, a league that both of us helped to build beginning in 2013. I've not only fallen hard for derby (many times literally) but also discovered a love of coaching in my five seasons of giving my blood, sweat, and tears to this sport. The only moments I've wavered in my determination to go through with this crazy travel plan have centered around my league and how much I don't want to leave them.

So instead of viewing it as a departure, I'm looking at it this way: we're going on a derby adventure. We're going to bring our skates and visit the practices and hopefully scrimmages of as many other leagues as possible while we're wandering the world.

Would you like to have us at your practice? Know a league we should visit? Email me: criminal wrecker at the google mail dot com. Info below for those leagues who may be kind enough to host us! 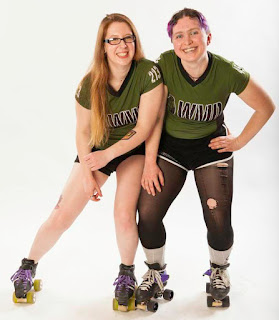