I bought the Scorpion Exo Savannah II riding pants in July and the matching Nip Tuck jacket about a month later. They're out of production, but as of this writing there are still quite a few for sale from various eBay sellers. Retail on the jacket is $189.95 and the pants are $179.95, but they can be found for significantly less. They come in three colors: all black, black and white with purple details and a pink hibiscus design, and black and white with gold details. I found my size in gold first, and it matches my bike...done deal. 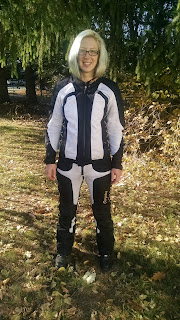 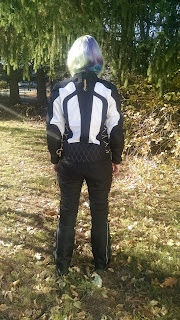 Comfort and Fit
The pants run a bit big. I ordered a small and I can pull the waistband away from my back or my belly by a couple of inches. I have to hike them up before I get on the bike or they pull oddly across the crotch. They're not at risk of falling down, though, and I like that I can fit any pair of pants I care to wear underneath them.

The jacket is also a small and it fits like a dream. It doesn't bind and it doesn't billow. The sleeves are narrow from the elbow to the wrist, so a very fat sweatshirt would be limiting, but I can wear several shirts and a thin sweater with no problem. If I need more warmth I add a vest-style hoodie underneath to keep my core insulated without turning my forearms into stuffed sausages.

The zip-out liners are great. They're wind-proof and water resistant. I do have to wear an under layer of some sort while the liners are in, because if they sit against my skin they get sticky and then I have that changing-out-of-a-wet-bathing-suit experience, except it's a head to toe ordeal instead of just the personal bits. But if the weather calls for liners, you should be wearing clothing anyway. 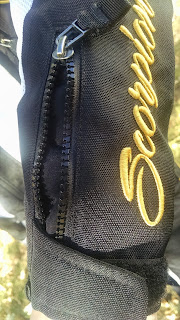 Speaking of weather, this suit covers a wide range of temperatures. Without liners, I'm happy in the jacket up to about 90F on the highway (I open the arm zippers and leave the wrist velcro closed), and I never take the pants off. With liners and some reasonable clothing (i.e. fleece leggings and a hoodie) underneath, I'll be okay down to maybe 55F before I want to add a rain suit on top. The only place that has severe air leakage is the neck of the jacket, since it's open down to the hollow of my throat.

The jacket has a tab in the back that can be secured through the rearmost belt loop on the pants to keep it from riding up. It doesn't hinder movement at all, as the jacket is pretty long, and it keeps the unfriendly wind gusts away from my lower back.

I haven't gone down while wearing it so I can't say anything about how it reacts to a sudden encounter with pavement. I hope it doesn't happen, but if it does, I'll post the results.

Quality
The pants have now gone about 10,000 miles and the jacket has done at least 7,000. There was one small issue with the pants after the first couple thousand miles - some thread in the crotch seam of the white panel gave way and opened a hole in the right place to insert dirty comments. But I took some quilting thread and sewed it back up, which took about three minutes, and they haven't had any further issues.

White is a downside of course, because it shows all the bug splats and road dirt, but a trip through the washing machine made it look like almost new again. 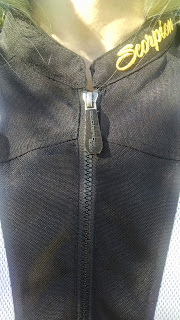 The main zippers - front of jacket, sleeves of jacket, pants fly, and ankle panels - are great. The little zippers that secure the inner liners are less so. They're inclined to get stuck on the fabric if you're not very diligent about keeping it away from the zipper's line of travel, and I had one of them tear open while I was trying to zip it closed. No damage was done and I put it back together successfully. They just require a little patience.

The liners are also secured by fabric tabs with snaps, two in each ankle, two in each wrist, and one in each side of the jacket. They're color-coded in black and yellow, so as long as you can tell a bumblebee's ass from its face, you can't get them wrong. That kind of attention to usability wins big points with me.

There are stiff foam armor panels in the knees, hips, shoulders, elbows, and spine. They zip out quite easily for washing and go back in without requiring hours of name-calling. The only oddity I found there is a lack of zipper pull on the access to the spinal armor. It makes sense, leaving no sharp metal bits to poke the wearer in the back, but you need a fingernail or something to get it started. I definitely can't put the pants on while wearing boots; I got my foot stuck in the knee armor when I tried.

Looks
Amazing! I'm in love with the cut, the colors, and the details. The pants are loose enough to allow me some layers underneath but tight enough to look damn good. I've wandered into restaurants and had people compliment them without even knowing they were riding pants; they look that nice. The sides of the jacket and the lateral edges of the thighs are laced with tubular elastic (in yellow on the gold version) for an adjustable fit. The appearance is reminiscent of corset lacing, but it says "race me" rather than "fuck me."
Posted by Skipper at 21:32