Anyway, where was I? Oh, right, leaving a biker bar after lunch in Cross Forks. I took 144 to route 6 east, and by the time I was in Wellsboro, the sleepiness had really set in. I debated getting a coffee, but decided I'd rather be sleepy now than awake at 2am.

I attempted to camp at Mount Pisgah State Park, but in my tiredness had misread my map, and they didn't have camping. I moved on to Wyalusing, stopped for gas, and was about to set off for the next campsite when I saw a bike loaded for touring parked at the bar across the street.

I moved Hades into the next space and went inside. At the bar, I found a couple with helmets, and asked if that was their bike. They said yes. I sat down and ordered a hard cider, and we got to bike talking. They were from Michigan, on their way to see the east for the first time, having already seen a lot of the western and central parts of the country. 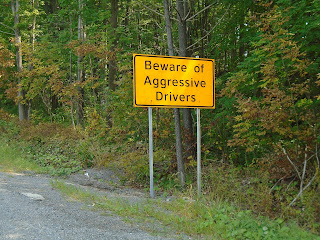 I said I was camping, and they said they had attempted to camp the night before but didn't know what they were doing and were now looking for a motel. I wondered what knowledge they had come up lacking but didn't get a chance to ask. Questioned about my origin, I was about to explain that the western and eastern parts of Massachusetts are quite different when the woman interrupted me and said, "Boston! Why don't you sound black?"

"Yeah, that!" She was very enthusiastic, but perhaps not as bright as many other people.

I again started to explain that the western part of the state is not the eastern part, and she talked over me. The conversation turned to milage, and the guy suddenly looked like he wanted to hide.

"How many miles have we done today?" she asked him. He mumbled. "It's at least a hundred," she said, laughing.

"I'd like to make a hundred today," he said to his beer, looking guilty.

"Are you kidding me!" she said, punching him lightly in the arm. "Don't fuck with me."

I didn't mention my own mileage, since he seemed to have decided that I was there to challenge him. In thirty seconds they had picked up their things, and he said he was going to look at my bike. I would've gone with him, but couldn't pay my tab and finish my cider in time, so I just stayed. It didn't seem like a conversation worth chasing. 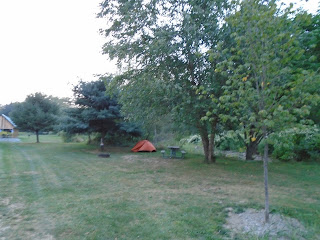 I camped in the boonies that night, up route 706 in Salt Springs State Park. The campsite was lovely, right next to a stream, under a tree, with a fire ring. I had a roaring campfire for only the third time since I've been gone. It seemed a fitting end to a wonderful trip, and I went to sleep grateful that I had decided to camp one more night and not force myself to drive home from Pittsburgh in one day.
Posted by Skipper at 08:30